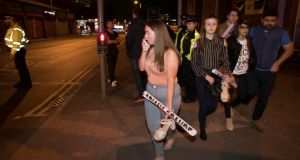 A leading security expert said it appeared that children were deliberately targeted in Monday night’s suicide bomb attack in Manchester.

Crime and security consultant at SAR Consultancy, Sheelagh Brady told The Irish Times the attack, which has so far claimed the lives of 22 people, appeared “well thought out” and had a level of sophistication that Europe has not seen before.

Ms Brady said the fact that children were clearly the target audience for the concert by Singer Ariana Grande, whose fan base is predominantly young girls, meant children were most likely the intended target of the terrorists.

The security consultant added while Ireland has stepped up its security since the 2015 terrorist attack in Paris the country still had a long way to go.

“I think the [security] level has improved since the Paris attacks, however, I don’t feel we are still at a level necessary to be in a position to respond effectively if an incident were to occur. I make that statement on the amount of training and the amount of exercises conducted in the UK and the amount of resources that go into that training.

“It’s very difficult to prevent an incident like this but once it happens the ability to respond can have a very significant impact of the containment of an incident. Also, I don’t think we have the first responder’s services to a level we should.”

Senior Gardaí told The Irish Times they are currently not aiding in the Manchester investigation but would be prepared to do so if asked.

Speaking on Tuesday Taoiseach Enda Kenny said that gardaí are in touch with their UK counterparts and that they share information on a regular basis.

“I’m expected to speak to the Garda Commissioner later this morning about the security arrangements that we’ll monitor constantly.”

“While there has been no change to the security assessment here and no specific information about a threat to us . . . The Garda Síochána, together with their colleagues in the Defence Forces and their international security partners, will continue to take all necessary measures to counteract such deadly threats.

Ms Brady described the attack in Manchester as “premeditated” and carefully planned to cause “maximum damage”.

“I think this incident where it appears the explosion detonated was on the border of the venue; what I mean by that is that you could publically be there without having gone through security controls to collect without passing security checks. So therefore, the amount of security searching bags was probably very minimal.

“It appears that where the explosion took place was chosen because it would have been a meeting point or collection point for many in attendance. This shows a degree of planning or awareness of what goes on at previous Manchester Arena events.

Ms Brady who worked with for 14 years with An Garda Síochána, before moving to the international security arena added that the attack was most likely done so because there were so many children in attendance.

“I think a person with this amount of pre-planning would have known there would have been a large proportion of children at the event. I think the venue was chosen to create that shock and awe factor of such an incident.

“I think Manchester showed a level of pre-planning that perhaps the London attack did not have if you were comparing them.

“Even using a person-borne explosive device or suicide-bomb again shows planning. While there are a lot of instructions out there of how to make them, getting them to work is quite difficult and they can go wrong very easily. So my gut at this point would tell me that there was an element of experience in making this device.

“Whether the person had this experience themselves or it came from a third party that remains to be seen.”

As frantic searches continue by parents and friends searching for loved ones, Ms Brady said the fact that the concert was attended by parents with young children was “chilling”.

“I think the reason [children in attendance] was probably one of the reasons the venue was selected. If you targeted an incident where there was an older crowd at the venue, then I’m not sure it would have the same shock and awe factor that they obviously had planned.

“I think the whole fact that children where the target audience of the concert then therefore children were the target of the incident, brings this act to a level which we have not seen before or at least in Ireland.

Ms Brady said that in the short term “security risk assessments” need to be carried out in Garda management.

“We need to give the public an insight, Ireland has taken the stance or it appears that when it comes to National Security little or nothing is said publically and I do feel the UK system is much more empowering of the public. They understand where the threat level is at and they understand when and why that changes and I don’t think we [IRELAND] Ireland has that and therefore we can feel more vulnerable.”