Second Brexit referendum ‘not a red line’ for Labour 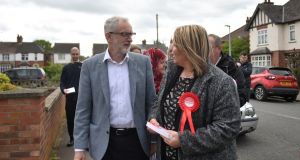 Labour could back a Brexit deal without the promise of a second referendum if talks with Theresa May’s government make progress this week, one of the party’s negotiators said on Sunday. Shadow Brexit secretary Rebecca Long-Bailey, a close ally to Jeremy Corbyn, said negotiations had been productive and that a second vote was not a red line for Labour.

“I wouldn’t couch it in terms of a second referendum; but our party policy has always been that firstly we want to get a Brexit deal that puts our economy and living standards first and protects our environmental protections, workplace protections, health and safety standards. We want a customs union arrangement in order to keep our borders open, so that our manufacturing industry isn’t detrimentally affected, and we keep the movement of goods flowing as freely as possible. And we want a strong single market relationship,” she told Sky News.

“If we don’t get a deal that satisfies those objectives – if it’s a damaging deal, a damaging Tory Brexit deal, or there’s a risk of us moving towards a no deal – in that circumstance, we’ve said that all options should be on the table, and that includes campaigning for a public vote.”

Labour’s National Executive Committee will on Tuesday discuss the party’s manifesto for next month’s European Parliament elections, amid pressure from activists to include a demand for a second referendum. Some Labour MPs, MEPs and activists reacted angrily last week when a draft manifesto omitted any mention of a second referendum and some have threatened not to campaign for the party without such a commitment.

Ms Long-Bailey said talks with the government had made progress on issues such as workers’ rights after Brexit but there was little expectation at Westminster of a breakthrough ahead of Thursday’s local elections. More than 8,300 council seats are up for election, most of them in Conservative strongholds in England and the party is braced for big losses.

Conservative party chairman Brandon Lewis said the government was still hoping to avoid contesting European Parliament elections on May 23rd by passing a Brexit deal in parliament before then. A poll of Conservative councillors last week found that 40 per cent planned to vote for Nigel Farage’s Brexit party in the European elections.

“I would want them all to vote Conservative, and I hope that they will. Because Conservative representation is better than any other party. And let’s remember just one really important thing on this, in parliament we are the only party that is working and consistently has voted to leave the EU,” Mr Lewis told the BBC.

A new YouGov poll of voting intentions for the European Parliament elections showed the Brexit party at 27 per cent, with the Conservatives falling to 13 per cent. The poll put Labour at 22 per cent, with the Greens and Change UK both at 10 per cent, the Liberal Democrats at 7 per cent and Ukip at 5 per cent.