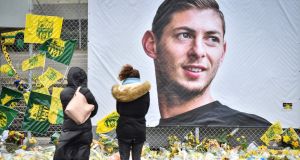 People look at yellow flowers displayed in front of the portrait of Argentinian forward Emiliano Sala at the Beaujoire stadium in Nantes, in February. Photograph: Loic Venance/AFP/Getty Images

British police said on Sunday they were investigating how a picture reported to be of the body of Argentinian footballer Emiliano Sala had been taken and posted online.

Sala (28) had been flying from his previous club Nantes in western France to Wales on January 21st to join up with Cardiff City when the single-engined Piper Malibu aircraft disappeared over the English Channel.

The wreckage was found on February 3rd following a privately-funded underwater search and a body was recovered three days later. Later that month Sala’s body was flown back to Argentina for his funeral.

“We are aware that a picture reported to be of Mr Sala’s body has been shared on social media channels and are disgusted that somebody did this,” a spokeswoman for Dorset Police said in a statement.

“It is clearly a very difficult time for Mr Sala’s family and they should not have to endure additional pain that this shameful act will undoubtedly cause. We are investigating this incident and are working together with a number of agencies to establish how the picture was taken and who is responsible.”

Sala’s father Horatio died aged 58 last week and was said by friends of the family to have never got over the death of his son. –Reuters/Guardian