Political novice Zelenskiy promises a bright future, but he too is dogged by the shadow of an oligarch 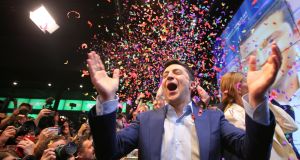 If Walter and Julian Kennedy could somehow return to Mariupol they would be amazed by what has become of this city in southeastern Ukraine.

Amid the many wonders of the modern age, the 19th-century engineers would be surprised that it still takes 15 hours for trains to clank 800km from Kiev to this port on the Azov Sea, and alarmed to learn that Mariupol is near the frontline of fighting between government troops and separatists led by Russia, which ruled this region when the American brothers were last here.

They would also be staggered to see that the factory they launched in 1897 has grown into a 15 km-long behemoth of sooty pipes and chimneys which constantly belches fire, smoke and an infernal clanging roar into the acrid air.

The Ilyich iron and steel plant and its slightly smaller neighbour Azovstal employ about 40,000 people in this city of half a million, and send millions of tonnes of metal through its port each year to more than 50 countries around the world.

The factories, which account for more than one-quarter of Ukraine’s steel exports, belong to Rinat Akhmetov, the country’s richest man and ruler of an empire spanning mining, energy, banking and media that employs 300,000 staff.

Forbes magazine estimates his wealth at $6.2 billion (€5.6bn), and he has spent some of it on Britain’s most expensive residence – One Hyde Park in London, for which he paid £136 million (€157m) – and on his football club Shakhtar Donetsk.

Akhmetov and the team left their hometown in 2014 when it was taken over by militants who subsequently seized his assets across Donetsk and Luhansk regions during a war that has killed some 13,000 people and displaced 1.6 million.

The fighting has ravaged Ukraine’s economy and briefly put a dent in Akhmetov’s fortune, but the miner’s son is once more growing richer and remains a major powerbroker who controls a cohort of deputies in the nation’s parliament.

Akhmetov also reached an accommodation with Petro Poroshenko, the confectionary billionaire who became Ukraine’s president after its 2014 Maidan revolution, to the benefit of both men’s business and political interests.

Yet Poroshenko’s failure to meet the key demands of the revolution – to end oligarchic rule, rampant corruption and impunity for the rich and powerful – led to his crushing defeat in last Sunday’s presidential election run-off.

Political novice Volodymyr Zelenskiy took 73 per cent of votes largely by repeating the promises of the character he plays in television comedy show Servant of the People, a teacher who is pitched into the presidency and sets about remaking a country strangled by graft, bureaucracy, crooked courts and vast inequality.

Zelenskiy (41) promises a bright future for Ukraine, but he too is dogged by the shadow of an oligarch.

His shows are broadcast by the 1+1 channel of Ukraine’s second-richest man, Ihor Kolomoisky, where Zelenskiy announced his run for the presidency last New Year’s Eve, and which proceeded to boost his candidacy throughout the campaign while pouring opprobrium and lurid allegations onto Poroshenko.

Zelenskiy’s political team includes Kolomoisky’s lawyer and is watched over by his security guards, leading plenty of Ukrainians to fear that Poroshenko may be right in describing his successor as the tycoon’s political puppet.

“It’s a choice between two evils,” Maxim Borodin, a councillor for the anti-corruption People Power party in Mariupol, said before the run-off.

“One you already know and realise he will not do anything good in a second term, and with the other you have no idea about his plans or how dependent he is on Kolomoisky. He’s also a big risk. Both options are rotten, and I couldn’t vote for either,” he told The Irish Times.

Borodin knows how oligarchs use wealth to bend politics to their will, having long campaigned for Akhmetov’s Metinvest firm to cut pollution from Ilyich and Azovstal to help improve Mariupol’s environment.

The company insists it is investing in cleaner technology, but last year the Kiev-based Central Geophysical Observatory found that Mariupol had the dirtiest air of Ukraine’s 39 biggest cities.

Borodin says his run for city mayor in 2015 was stifled by a lack of coverage in local media owned or influenced by Akhmetov, and which focused on election winner Vadim Boichenko, a former Metinvest manager at the Ilyich works.

“I went into politics after Maidan to change the rules of the game that Akhmetov and others play by,” said Borodin.

“We brought a new style of politics to Mariupol – going door to door, talking to people, delivering an anti-corruption message and facts about the misrule of familiar politicians. Now People Power has five of the 54 seats on the city council,” he said.

“The mayor could criticise the lack of modernisation [at Ilyich and Azovstal], their environmental record and other things. But in fact most officials here represent the interests of Metinvest. They are controlled by the oligarch.”

Zelenskiy promises to change Ukraine’s political rules at the national level, and his presidency is likely to be judged on how he handles the oligarchs. He has talked about relaunching the country’s faltering anti-corruption drive and offering businessmen an “amnesty” on wealth currently hidden from the financial authorities – a one-off chance to declare the assets and pay 5 per cent tax on their value or face losing them completely if they are seized by the courts.

“As regards the oligarchs, I’m ready to meet with big business,” Zelenskiy said recently. “I think they could hand over a bigger share to Ukraine, which has given them billions. And the rules must be identical for everyone. I’m sure that we can agree with all businessmen. We want to bring capital out of the shadows.”

Zelenskiy is reputedly a savvy operator in his own right, having built up his own successful media business alongside a career in the spotlight. Yet the oligarchs will pose a formidable challenge, with their vast resources, business empires upon which Ukraine’s economy rests, political clout and ability to form ad hoc alliances to defend mutual interests and fight any threat to their status.

Zelenskiy will face immediate scrutiny over the case of PrivatBank, Ukraine’s biggest lender and formerly the property of Kolomoisky, which the government nationalised in 2016 amid fears of collapse and allegations of fraud.

On the eve of the presidential run-off a Kiev court found the change of ownership was illegal, potentially dealing a major blow to Ukraine’s standing among western states and international lenders who backed the nationalisation.

Kiev’s central bank is appealing against the verdict, which prompted speculation that judges or political powerbrokers are trying to curry favour with Kolomoisky before his business partner Zelenskiy takes power.

Zelenskiy called the ruling on PrivatBank “major and problematic for the next president”, but insisted he would not be swayed by his links to its former owner – who has suggested that he should receive $2 billion in compensation for his losses.

“I guarantee that I will do everything to ensure that PrivatBank is stable and does not affect economic and banking matters,” Zelenskiy said. “I only talk to Mr Kolomoisky about co-operation with the 1+1 channel, and as regards PrivatBank I will only defend the state of Ukraine.”