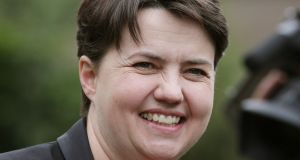 Ruth Davidson is expected to quit as leader of the Scottish Conservative Party because of her irreconcilable differences with British prime minister Boris Johnson over Brexit, as well as because of the pressures of motherhood.

Scottish Tory sources said an announcement was imminent. Ms Davidson was “considering her position”, one source added, although he stressed it was not connected to Mr Johnson’s decision on Wednesday to prorogue parliament.

“Ruth will make her decision clear in due course, and there will be no further comment this evening,” her spokesman said.

Ms Davidson made it abundantly clear during the recent Tory leadership campaign that she did not believe Mr Johnson was the right leader for the UK Conservative Party.

One of Mr Johnson’s first acts as prime minister was to sack Ms Davidson’s close friend and ally David Mundell, who served as Scottish secretary for five years. – Guardian