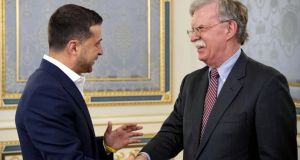 US national security adviser John Bolton has warned that Chinese investments could pose “threats” to Ukraine, as its novice leader prepares for a likely meeting with US president Donald Trump this weekend.

Washington is particularly alarmed by a Chinese bid to buy Motor Sich, a large but struggling Ukrainian maker of missile, aeroplane and helicopter engines that could strengthen Beijing’s defence industry.

“We laid out our concerns about . . . unfair Chinese trade practices, threats to national security we’ve seen in the United States,” Mr Bolton said after talks with Ukrainian president Volodymyr Zelenskiy in Kiev.

“I think that if the fight against corruption is one of the priorities in Ukraine, then the last thing the Ukrainian people would like to see is even more corruption that enters the country from the outside,” he added, while declining to discuss specific deals.

Amid a growing rivalry and trade war with China, the US accuses Beijing of stealing intellectual property and military secrets and using major infrastructure and other financial projects to gain political leverage around the world.

When Mr Bolton arrived in Kiev on Tuesday, the Ukrainska Pravda news outlet quoted him as saying: “The Chinese are not afraid to use corruption – or to put it bluntly, bribes – to get the decisions they want . . . Ukraine will make its own decision, but maybe Ukraine will find a better option that will have better consequences for its citizens.”

Kiev has leaned heavily on the US for everything from financial aid to military training and weaponry since 2014, when Russia annexed Crimea and fomented a war in eastern Ukraine that has killed 13,000 people and drained the national economy.

Mr Bolton said Mr Zelenskiy, who was a comedian before sweeping to victory in presidential elections in April, is likely to hold some form of meeting with Mr Trump when they are in Poland on Sunday to mark 80 years since the start of the second World War. Plans for more substantial talks at the White House are being discussed.

Ukraine’s parliament is due to hold its first session on Thursday, and it will be dominated by new faces after elections in July swept out much of the old guard and handed a majority to Mr Zelenskiy’s Servant of the People party.

He and his allies pledge to relaunch the fight against corruption and overhaul the country’s discredited criminal justice system, while trying to boost the economy, attract foreign investors and negotiate an end to the conflict with Russia.

Mr Zelenskiy is pressing for a resumption of peace talks in the so-called Normandy format, involving the leaders of Ukraine, Russia, Germany and France.

His office said on Wednesday that he was “hopeful that the US will be more involved in the negotiation process” and he “would welcome the accession of the United States to the Normandy format”.

Mr Bolton told Radio Free Europe that Mr Zelenskiy “would be well-advised to look at how to unfold a strategy of dealing with the Russians very carefully . . . I don’t think there is any reason to rush into one course of action or another.”