Rees-Mogg relaxes as May’s rebels lay down their weapons

But government won by only 16 votes, which will be seen as a dangerously tight margin 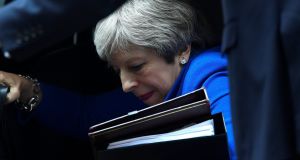 Theresa May returns to Downing Street after winning a Brexit vote in parliament in London, on Wednesday. Photograph: Toby Melville/Reuters

Their expressions seemed to tell the story, with Tory rebel leader Dominic Grieve looking anguished after he said he would vote against his own amendment, while arch-Brexiteer Jacob Rees-Mogg lay back in his bench as if it was a chaise longue, chuckling with a couple of acolytes.

After the vote, Rees-Mogg sent a message to his allies in the Brexiteer European Research Group (ERG) celebrating the government’s victory.

“The government stood firm today and was able to win comfortably while Dominic Grieve and his supporters behaved very decently by accepting the assurance of a written ministerial statement. It is a happy occasion when all may claim an element of success,” he said.

During the debate, Grieve was sceptical about the government’s claim that giving MPs a meaningful vote on the outcome of the Brexit negotiations would weaken Theresa May’s hand in talks with Brussels. But after the vote, he made clear that his retreat was motivated in part by the threat a defeat in the Commons on Wednesday posed to her hold on the premiership.

“We’ve managed to reach a compromise without breaking the government – and I think some people don’t realise we were getting quite close to that. I completely respect the view of my colleagues who disagree, but if we can compromise we can achieve more,” he said.

Last week, the Conservative rebels demonstrated their strength – and the fact that there is no majority in parliament for a no-deal Brexit – so that May agreed to accommodate their demands rather than risk a defeat in the Commons. According to some rebels, the prime minister subsequently welched on that deal but on Wednesday most of them laid down their weapons rather than deliver what might have been a fatal political blow to their party leader.

Still, the government won by only 16 votes, with just four Labour Brexiteers crossing the floor to vote against the Grieve amendment. The whips will see that as a dangerously tight margin ahead of a vote next month on an amendment to a trade Bill that would keep Britain in a customs union with the EU.

The dispute between Grieve and the government centred on whether a government motion following failure to reach a Brexit deal could be amended by MPs. The ministerial statement published on Wednesday said it would be for the Commons speaker to decide if its motion “in neutral terms” was amendable.

Labour MPs pointed out that, according to Commons standing orders, such a motion cannot be amended. But in a note before the vote, Commons clerks said that “the House is free to agree to disapply standing orders” and make any motion amendable.

As Rees-Mogg pointed out, the House will always find a way to make its views known, citing the 1940 Norway debate which ushered Neville Chamberlain out of office. The motion on that occasion was “That this House should adjourn” and although the government won the debate, the size of the Conservative rebellion ensured that Chamberlain was replaced within days by Winston Churchill.

The Norway debate is a signal moment in Brexiteers’ Finest Hour lore but amid the behind the scenes manoeuvres and arcane procedural arguments, Wednesday’s debate had less of the White Cliffs of Dover about it than of Matthew Arnold’s Dover Beach:

“And we are here as on a darkling plain

Swept with confused alarms of struggle and flight,

Where ignorant armies clash by night.”