New proposals to clamp down on bogus self-employment practices

Unions say the practices cost the State hundreds of millions of euro in lost revenue, and can deny workers key rights and benefits 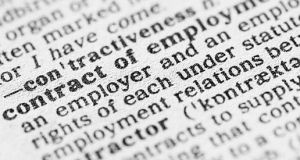 Bogus self-employment arrangements are where workers are forced by an employer to declare themselves self-employed rather than employees. Photograph: Getty Images

New proposals aimed at clamping down on bogus self-employment practices are to be considered by Government this week.

Unions maintain the practices are costing the State hundreds of millions of euro in lost revenue, and can result in workers being denied key rights and benefits.

Bogus self-employment arrangements are where workers are forced by an employer to declare themselves self-employed rather than employees.

Minister for Employment Affairs and Social Protection Regina Doherty is to propose to the Cabinet that a new “standalone “ team – which could potentially evolve into a separate agency outside of her department – be put in place to investigate alleged incidents of bogus self-employment in large companies, as well as to deal with complex cases.

In addition, about 200 social welfare inspectors are to be retrained to carry out employment investigations as soon as possible.

Under the Minister’s proposals new legislation would be introduced to try to prevent victimisation of workers who seek an official determination of whether they are actually genuinely self-employed.

The Minister is also looking at changing legislation to permit deciding officers to make determinations on the employment status of groups or classes of workers who are engaged and operate on identical terms and conditions.

At present both employers and workers have to agree to such class decisions, and these can be subject to separate individual appeals.

Ms Doherty’s proposals would also involve an existing code of practice for determining the employment status of workers being revised based largely on case law which has emerged since its introduction in 2007. Under her proposals this updated code of practice would be placed on a statutory footing.

The Department of Employment Affairs and Social Protection defines false or bogus self-employment as being where an employer wilfully and wrongly treats an employee as a self-employed contractor in order to avoid tax and social insurance contributions and other employment rights which attach to employment.

Ms Doherty is bringing the proposals aimed at dealing with bogus self-employment as the Government prepares to oppose draft legislation in this area proposed by Senator Ged Nash of the Labour Party .

The Irish Congress of Trade Unions maintains that the practice of misclassifying workers as self-employed has been a problem in Ireland for a number of years, and can have “very negative and serious consequences for workers”.

It says that because their employer is not required to pay employers’ PRSI, such workers are not entitled to a full range of social welfare benefits.

Last autumn the Connect trade union claimed bogus self-employment was rampant in the construction industry, and it called on the Government to move immediately to stamp out this practice ,

The general secretary of Connect, Paddy Kavanagh, said research indicated that the State was losing out on up to € 300 million in tax and PRSI as a result of bogus self-employment arrangements.

He said the practice also resulted in workers being denied key rights and safeguards.