Polonium found across London at time of Litvinenko death

Thousands put at risk from radioactive material after spy was poisoned 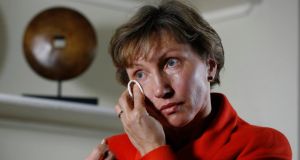 Marina Litvinenko, the wife of former KGB agent Alexander Litvinenko who was murdered in London in 2006, wipes away a tear during an interview in London on January 21st. Photograph: Luke MacGregor/Reuters 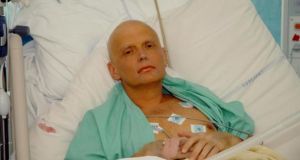 Thousands of people were put at risk from radioactivity when Russian spy Alexander Litvinenko (above) was poisoned, a public inquiry has heard.

Thousands of people were put at risk from radioactivity when Russian spy Alexander Litvinenko was poisoned, a public inquiry has heard.

Counsel to the inquiry Robin Tam QC told the inquiry traces of radioactive chemical polonium were found across London at the time of Mr Litvinenko’s death.

Mr Litvinenko (43) died in hospital nearly three weeks after he had consumed tea laced with the substance while meeting two Russian men - one a former KGB officer - at the Millennium Hotel in London’s Grosvenor Square.

Former KGB bodyguard Andrei Lugovoi and Dmitri Kovtun have been identified as the prime suspects in the killing, but both deny any involvement and remain in Russia, the inquiry heard.

Mr Tam said a public health alert was issued around the time of Mr Litvinenko’s death when traces of polonium were found in “large numbers of places across London”.

“Many thousands of members of the public, including British residents and visitors from overseas, might have been at risk from radioactivity,” Mr Tam said.

He said many theories have been put forward about what happened to Mr Litvinenko, including that he was killed but also that he accidentally poisoned himself when handling the radioactive substance as part of a smuggling deal.

It has also been suggested that Mr Litvinenko committed suicide, Mr Tam said.

The counsel to the inquiry recounted the process that has unfolded in the eight years since Mr Litvinenko died, which saw an inquest replaced with this public inquiry.

Mr Tam said the inquiry approach will “continue to be the need to conduct a full, fair and fearless investigation”.

The QC then gave a detailed account of how the inquest was eventually replaced by an inquiry.

The British government previously resisted launching an inquiry, instead saying it would “wait and see” what a judge-led inquest found, but the High Court ruled the Home Secretary should reconsider the decision.

Sir Robert said it has been noted that polonium - the deadly substance that was used to poison Mr Litvinenko in November 2006 - could have been used to “kill large numbers of people or spread general panic and hysteria among the public”.

The chairman said sensitive evidence had established that there is a “prima facie case” as to the culpability of the Russian state in Mr Litvinenko’s death.

Giving the background to the case, he said British home secretary Theresa May wrote to him in July 2013 informing him that the Government had decided not to hold an inquiry at that time.

Sir Robert said: “Her decision was challenged in a claim brought on behalf of Marina and Anatoly Litvinenko (his wife and son) and was quashed in a judgment of the divisional court dated February 11 2014.

“In short, I will carry out a full and independent inquiry into the circumstances of the death of Alexander Litvinenko.”

Sir Robert said that both Mr Lugovoi and Mr Kovtun have been invited to give evidence to the inquiry via video link from Russia - an “invitation I hope will be accepted”.

He added that “unhappily proceedings had been plagued by delays”.

Mr Tam said the inquiry would have to consider whether Mr Litvenenko’s death had been linked to his relationship with Russian businessman Boris Berezovsky.

The connection between the two men dated back to 1994, when Mr Litvinenko had been involved in investigating an assassination attempt against Mr Berezovsky. In 1997 he was given orders to kill Mr Berezovsky, which he considered to be “improper”, and the following year he met the newly appointed head of the FSB. “That man was Vladimir Putin,” Mr Tam said. Later that year FSB officers staged a televised press conference with Mr

Litvinenko as their spokesman, reporting the order to kill Mr Berezovsky and denouncing corruption in the Russian intelligence service. Mr Tam said: “Is it possible that Mr Litvinenko’s actions in Moscow on that day in November 1998 led to him being poisoned in London eight years later?”

Mr Berezovsky, who was found hanged at his Berkshire home in March 2013, financially supported Mr Litvinenko and his family when they arrived in the UK, the inquiry heard. And the billionaire was a regular visitor at Mr Litvinenko’s bedside in the days leading up to the latter’s death.

The inquiry also heard that Mr Litvinenko had served in the first Chechen war during 1995 and became “sympathetic” to the rebels’ cause, converting to Islam before his death.