Border ‘backstop’ should not be feared, May tells North’s businesses 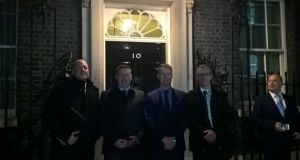 Business leaders from the North at Downing Street for a meeting with UK prime minister Theresa May. Photograph: Seamus Leheny

The “backstop” solution to avoid a hard Irish border post-Brexit should not be feared, UK prime minister Theresa May told Northern Ireland businesses at an event in Downing Street.

As part of her campaign to win support for the draft divorce deal ending the UK’s 45-year membership of the EU, Mrs May invited about 40 to 50 business representatives from Northern Ireland to a reception on Thursday evening.

She assured her visitors that the contentious backstop was an insurance policy in the event that no trade deal could be reached to solve the Border issue and felt that it would not be needed, sources who attended the event said.

If the backstop was required, Mrs May said, it could prove beneficial and would not be detrimental to Northern Ireland or undermine the constitutional or economic integrity of the UK.

Trevor Lockhart, the chairman of CBI Northern Ireland and agri-business chief executive of Fane Valley Co-Op, was the only other person to speak at the event that lasted more than an hour.

During the reception, Mrs May said she was very hopeful of securing final agreement on the draft withdrawal deal agreed last week at the special Brexit summit of EU leaders on Sunday.

She expressed confidence that the agreement would be ratified by the UK parliament, though she acknowledged that she had work to do to convince lawmakers of the merits of the deal.

“She said she was confident and that she is going to have to do some convincing and talking to parliament. She was convinced that she could reassure those who doubt the deal,” said Seamus Leheny, policy manager with the Freight Transport Association, one of those invited to the meeting.

The UK leader made no reference during the meeting to the Democratic Unionist Party, whose 10 MPs keep Mrs May’s minority government in power at Westminster and whose opposition to the withdrawal agreement has caused a rift with the Northern Irish business community.

She thanked Northern Irish businesses for their support for the agreement.

Mrs May insisted she wants a EU-UK trade deal with no fiscal or regulatory barriers between the EU and the UK, including along the land border in Ireland.

She said that she believed she could agree a trade deal with the EU that would have the same benefits for Northern Ireland as the backstop option.

“We were there not just to support her and the withdrawal agreement,” said Aodhán Connolly, director of Northern Ireland Retail Consortium.

“There was some talk about what still needed to be done; it wasn’t solely a congratulatory meeting at all.”