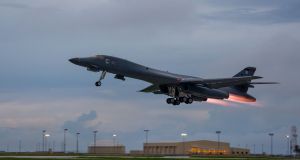 A US air force B-1B bomber taking off from Andersen air force base, Guam, on Tuesday. Photograph: Joshua Smoot/AFP/Getty Images

The US air force has flown two B-1B strategic bombers over the Korean Peninsula in a show of force against North Korea, amid simmering tensions in the region over Pyongyang’s nuclear weapons programme.

The two bombers were joined by two F-15K fighters from the South Korean military after leaving their base in Guam, South Korea’s joint chiefs of staff said, and staged a simulated air-to-ground missile firing drill over the East Sea and the Yellow Sea.

The exercise was part of a “regular deployment training” to enhance the “extended deterrence” against the North.

“Through the practice this time, South Korean and US air forces showed off the allies’ resolve for strong retaliation against North Korea’s nuclear and missile threats,” the joint chiefs said in a statement.

In the past few weeks, North Korea has launched two missiles over Japan and held its sixth nuclear test as it tries to develop a missile that can hit the mainland while carrying a nuclear warhead.

There has been a series of insults traded between US president Donald Trump and North Korean leader Kim Jong-un during the period.

The US aircraft came from the Andersen Air Force Base in Guam, a US-controlled island in the Pacific that was named by North Korea as a possible target for intermediate-range missiles.

US defence secretary Jim Mattis said currently the strategy towards North Korea was a “diplomatically led, economic sanctioned, buttressed effort to try to turn North Korea off its path”.

Mr Trump was briefed at a national security team meeting by Mr Mattis and the chairman of the US joint chiefs of staff, General Joseph Dunford. Mr Trump is giving the impression that he has dismissed a diplomatic solution, saying “only one thing” could resolve the crisis, which could possibly mean military action.

This week, North Korea is celebrating the 72nd anniversary of the founding of the ruling Workers’ Party, which has sparked fears Pyongyang may use the anniversary to stage another provocation, such as a nuclear test.

Later this month China’s ruling Communist Party will gather for a twice-a-decade congress at which President Xi Jinping is expected to cement his grip on power.

Many of North Korea’s tests of late have coincided with major events in China, and some believe that Pyongyang may be trying to annoy its ally because it has backed sanctions on the United Nations Security Council.

In China, the Global Times newspaper said the sabre-rattling on both sides needed to end at this point because it was caused deep unease in the region.

“Washington and Pyongyang have been intensifying hostile and threatening rhetoric against each other for some time. Their frequent sabre-rattling, unimaginable in the past, is escalating tensions in northeast Asia. This is worrying. Both the US and North Korea are believed to have strengthened their combat readiness. In such an extreme atmosphere, it is easy to trigger a fatal misjudgment,” it said.

“The international community won’t accept North Korea as a nuclear power. North Korea needs time and proof to believe that abandoning its nuclear programme will contribute to its own political and economic advantage. This positive process is worth a try,” the paper said.