Members who vote against the Government should be heard – not disciplined 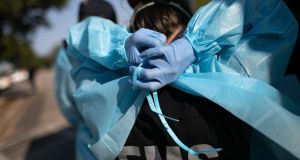 An Austin-Travis County medic dons personal protective clothing, on August 5th, 2020, in Austin, Texas. Medics were entering a nursing home to transport a resident with Covid-19 symptoms to a hospital. Photograph: John Moore/Getty

After his death, the media referred consistently to John Hume’s Nobel Prize acceptance speech, where he expressed his admiration for how the European Union had succeeded in finding unity across diversity. He stated that “The answer to difference is to respect it. Therein lies a most fundamental principle of peace – respect for diversity.”

In light of global political trends and the narrower correlation between types of governments and success in managing the pandemic, Hume could have added that respect for diversity also contributes to effective policy responses to external crises. Faced with the dual shocks of the pandemic and sudden and dramatic declines in economic growth, leaders in the countries most affected by the pandemic, such as Donald Trump, have not only failed to listen to advice, they have also prioritised the interests of their political party and, most of all, their particular faction within the party. Unfortunately, when some of these leaders have eventually decided to act, they have revealed scant capacity to think differently. The influence of self-interested party politics has been too ingrained and too constraining.

The governor and Republican Party in Texas, where I am from, have demonstrated for all the world how loyalty to political party tenets, and little countenance for different views, can lead to disaster. In fact, their example raises the question of whether the opposite – or coalitions composed of parties with divergent interests, like we have here in Ireland – are better suited to the current challenges we face.

I have lived away from Texas for most of my life but, in a fairly itinerant life, it remains the place where I have lived the longest. Both sides of my family migrated to Texas over a hundred years ago, and a few members through the port city of Galveston, which substituted for an overburdened Ellis Island as an entry point for Russian Jews in the early 20th century.

For much of my life, the Republican Party has dominated Texas politics. The party has controlled the Texas legislature (Senate and House) and the governorship since 2003. With the exception of Ann Richards, who was elected governor in 1990 for one four-year term, all of the governors of Texas have been Republican since the late 1980s. Texas has also voted for the Republican presidential candidate in every election since 1970 except in 1976, when Jimmy Carter won.

The party’s expressed mission in Texas is to limit government, lower taxes, spend less, and preserve individual liberty. This approach has led to legislation permitting the carrying of concealed weapons and the notable absence of a state income tax, despite evident need for public investment. Texas possesses one of the highest poverty rates in the country, and ranks near the bottom in the US for public expenditure per person in healthcare and education. These “internal” problems, combined with repeated droughts and hurricanes and a large illegal migrant population that may not have adequate access to healthcare or be afraid to seek it, provide the context for the pandemic.

The dominance of the party has begun to crack, if only slightly, as the demographics of the state change. Seats in urban centres in particular have become more contested, and indeed, in 2016, Hillary Clinton won in the state’s major cities. This year, Joe Biden is running close to Trump in the polls in Texas. But for now, the Republican Party is in control, and debates about how to respond to the pandemic seem to be subsumed within intra-party politics.

Governor Greg Abbott waited until the end of March to impose a lockdown, though he did not want to call it that. Party members rebelled anyway, and he quickly planned for a reopening. He succumbed to pressure to allow for bars to reopen in May and refused to allow mayors to mandate wearing of masks until early July, when cases were spiralling and the rate in Texas had become international news. The state now has almost 500,000 cases, or approximately the same number as in the UK and France combined, despite a population difference of about 100 million.

The obvious lesson from Texas is not to let party politics govern decision-making in a crisis. Internal party dissent can be constructive because it holds leaders accountable and contributes to public debate. But when one party rules, this dissent risks undermining the leader’s political authority and his or her ability to act effectively.

In contrast, multi-party coalitions expect divergent views and a process of negotiation to achieve a consensus. Coalitions are far from perfect arrangements, especially for smaller parties, which often suffer electoral defeat once the term of government ends. But the current crises have shown how significant listening to evidence and alternative ideas can be for devising solutions to difficult and complex issues.

Correspondingly, disagreement within the current Coalition Government in Ireland may seem like weakness and instability but perhaps the frictions instead indicate a way forward for politics in general, regardless of the actual parties. In this scenario, coalition party members who refuse to vote with the government would not necessarily be “disciplined” with a heavy-handed response such as removal of the whip, but rather be respected – and heard – for holding an alternative view, as the primary objective is to resolve the problem, not enforce authority.

Beyond its performance in relation to the current public health and economic crises, the current government will be judged on whether and how it addresses the long-standing problems of inequality in housing, income and access to health services, and the slow progress on climate action. If the parties in Government show a willingness to learn from each other, and the opposition, because they recognise how ambitious and innovative they must be in policy-making, then they will generate greater public confidence in the Government and the country’s future.

Global protests this year have shown how disappointed many citizens are with their leaders and repeated policy failures, or even failure to have a policy. Perhaps now is the time to look for leaders who see success in diversity.

1 Coronavirus: Donnelly ‘cautiously optimistic’ about Dublin
2 Susie Dent: ‘Jimmy Carr is incredibly rude to me. I took it as a compliment’
3 More than 30 people queue overnight to secure property in Carlow
4 My friends keep mocking my new boyfriend’s small penis
5 ‘To die of love’: The 1968 sex scandal that still fascinates France
Real news has value SUBSCRIBE