Mood shifts against May as she seeks support for Brexit deal 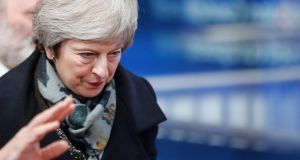 Theresa May’s government has promised MPs that the vote on her Brexit deal, which was postponed this week, will take place before January 21st next year. But as the prime minister toured European capitals to seek concessions on the Northern Ireland backstop, speculation was rife at Westminster about an imminent challenge to her leadership.

Conservative Brexiteers who failed to win enough support to challenge Mrs May last month were confident on Tuesday that they were close to winning the backing of enough MPs to trigger a confidence vote. If Graham Brady, chairman of the backbench 1922 Committee, receives 48 letters calling for such a vote, a ballot could be held within days.

Former Conservative leader Iain Duncan Smith, a Brexiteer who has until now opposed a challenge to Mrs May, said there was a “mood shift” against her.

“I detect in the last 24 hours people have decided this isn’t going to work out . . . and people who wouldn’t have put letters in are openly saying ‘my letter is going in’,” he told ITV News.

Veteran Eurosceptic Bill Cash said Mrs May’s decision to postpone the vote on her Brexit deal rather than face a crushing defeat had doomed her premiership.

“The prime minister has now reached the cliff-edge of resignation. I believe that she may well have to resign. Yesterday’s events – running away from the vote and then off to Germany, Holland and the EU – was yet another humiliation for the United Kingdom. She is clinging to the wreckage. She has reached the point of no return,” he said.

Sir Bill was speaking during an emergency debate on the prime minister’s decision to postpone the vote, which Labour leader Jeremy Corbyn said demeaned her office. He said Mrs May no longer had the authority to negotiate for her country if she had lost authority in her own party.

But Mr Corbyn resisted calls from other opposition parties to table a motion of no confidence in the government, saying he would do so at “the appropriate time”. The Labour Party leader’s critics accuse him of dragging his feet because his party’s policy demands that, if an attempt to trigger a general election fails, Labour should pursue other options for Brexit, including a second referendum.

Former Conservative cabinet minister Nicky Morgan suggested that a government of national unity might be needed to prevent a no-deal Brexit.

“I do not know how we test parliamentary opinion if we do not have a vote. Perhaps we need to set up a special select committee of senior members of parliament to hammer out what we mean. Perhaps it is time for some sort of government of national unity,” she said.

“Perhaps it is time for a free vote on the deal, avoiding the usual party political constraints. However, I do know that with 108 days to go until this country leaves the EU, if the government cannot sort out this matter of great national importance, parliament must step in, stop posturing and get down to work to hammer out a deal.”