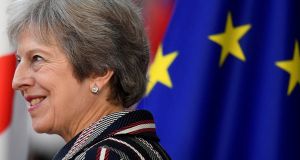 UK Prime Minister Theresa May said any agreement will be dependent on an ‘acceptable’ framework. Photograph: Toby Melville/Reuters

UK Prime Minister Theresa May has told her cabinet that she will not agree a withdrawal deal with the EU “at any cost”.

Mrs May said any agreement will be dependent on an “acceptable” framework for future relations in areas like trade and security, expected to be covered in a separate political declaration.

At the regular weekly meeting in 10 Downing Street, senior ministers discussed proposals for a “review mechanism” to ensure that the UK is not stuck indefinitely in a possible backstop arrangement designed to avoid a hard border in Ireland.

The meeting came as hopes of a special Brexit summit to finalise the withdrawal agreement in November appeared to be receding.

A gathering of EU leaders in Brussels on the previously mooted date of November 17th is now thought to have been ruled out, while a special summit later in the month would be dependent on EU negotiator Michel Barnier declaring that “decisive progress” has been made in talks.

Mrs May assured ministers that there would be another Cabinet before any agreement is settled, though her official spokesman said no extra meeting has yet been scheduled ahead of the regular weekly gathering next Tuesday.

Sterling fell to a day’s low against the dollar of $1.3020 and British government bond futures rose to a session high on the news.

“Many business chiefs and investors fear politics could scupper a deal, thrusting both the EU and the United Kingdom into a “no-deal” Brexit that they say would weaken the West, panic financial markets and block the arteries of trade.

British trade minister Liam Fox said on Tuesday it was “impossible” to say if a Brexit deal could be reached with the EU this month or next, but that Britain wanted an agreement, and a deal is better than no deal.

Negotiators are trying to find an emergency Border fix that would satisfy Ireland, the Democratic Unionist Party and May’s divided Conservative Party.

Ireland insists that there must be no border infrastructure, the DUP insists Northern Ireland must not be treated differently from mainland Britain, and Brexiteers say Britain must have the right to do its own trade deals after Brexit.

The DUP’s refusal to sign off on an initial deal on the Border caused the temporary collapse of the talks at a crucial stage last December, before negotiators found a way to keep all sides on board and allow talks to move forward.

An open frontier is seen as crucial to not disturbing the 1998 Good Friday peace agreement that ended decades of sectarian bloodshed in Northern Ireland.

The backstop arrangement is intended to ensure a solution to the problem if no other solution is found. London wants the backstop to be provisional rather than permanent, but the EU has resisted any suggestion that it could expire.

On Monday, Taoiseach Leo Varadkar said Dublin was willing to examine ways in which the backstop could be reviewed, so long as it does not permit Britain to unilaterally walk away from it.

The DUP’s Donaldson, whose party has constantly criticised Dublin’s approach, said a no-deal Brexit would have serious consequences for Ireland’s economy and he “can’t understand why Irish Government seems so intent on this course.”

Minister for Foreign Affairs Simon Coveney spoke last month of “carnage” if Britain crashed out without a deal, though he said that would mostly be felt by the United Kingdom, with Ireland likely to benefit from “huge solidarity” from fellow EU member states.

Ireland’s Central Bank has forecast that if Brexit were to leave the trade between Britain and Ireland governed by World Trade Organisation rules for countries with no bilateral deals, Ireland’s gross domestic product (GDP) would be 2.9 percent lower in the long run.

However the Irish economy would approach such a scenario from a strong position, having grown faster that any other in the EU for the past four years and with the central bank expecting GDP to expand by a further 6.7 percent this year.