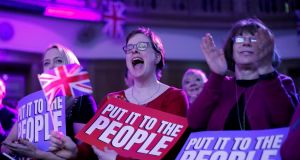 MPs have voted by 420 to 110 to approve Theresa May’s request to delay Brexit until June 30th, as four hours of talks between the government and Labour on a common approach to leaving the EU failed to produce a breakthrough. Almost 100 Conservative MPs voted against an extension and a further 80 abstained, including 12 ministers.

EU leaders must unanimously approve any extension to the article 50 negotiating period at Wednesday’s emergency meeting of the European Council in Brussels. The prime minister will make a statement and answer questions from the other 27 EU leaders at the start of the meeting but will then withdraw while they make their decision.

In a letter to EU leaders on Tuesday night, European Council president Donald Tusk suggested that an extension until June 30th would be too short because there was “little reason to believe” that Westminster could ratify the withdrawal agreement by the end of June.

“One possibility would be a flexible extension, which would last only as long as necessary and no longer than one year, as beyond that date we will need to decide unanimously on some key European projects. The flexibility would allow to terminate the extension automatically, as soon as both sides have ratified the withdrawal agreement. The UK would be free to leave whenever it is ready,” he said.

Mr Tusk said a longer extension would come with certain conditions, including no reopening of the withdrawal agreement and no start of the negotiations on the future, except for the political declaration. He said Britain “would have to maintain its sincere co-operation also during this crucial period, in a manner that reflects its situation as a departing member state”.

The British government’s efforts to agree a common approach to Brexit with Labour resumed on Tuesday with four hours of talks in Downing Street. But with the two sides still at odds over the issues of a customs union and a second referendum, there will be no agreement ahead of Wednesday’s summit.

“We have had further productive and wide-ranging talks this afternoon, and the parties have agreed to meet again on Thursday once the European Council has concluded,” a Downing Street spokesman said.

“We have yet to see the clear shift in the government’s position that is needed to secure a compromise agreement,” a Labour party spokesperson said.

Labour has insisted that Mrs May must abandon her opposition to a customs union if the talks are to make progress. But in a letter to Conservative backbenchers on the 1922 Committee on Tuesday, international trade secretary Liam Fox said Labour seemed not to understand the implications of customs union membership.

“We would be stuck in the worst of both worlds, not only unable to set our own international trade policy but subject, without representation, to the policy of an entity over which MPs would have no democratic control,” he said.