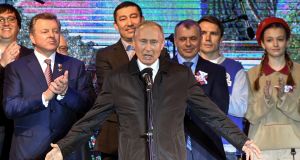 Russian president Vladimir Putin has visited Crimea to celebrate five years since he annexed it from Ukraine, as the West urged him to reverse the move and vowed never to recognise Kremlin control over the strategic Black Sea peninsula. In the port city of Sevastopol, home to the Russian navy’s powerful Black Sea fleet, Mr Putin inaugurated one of two new power stations that he called symbols of the region’s break from Ukraine and their bright future under Moscow’s rule.

On Monday evening he was due to attend a concert to mark the day Russia incorporated Crimea in 2014, shortly after a disputed referendum on the issue and less than three weeks after Russian troops had seized control of the region. “March 18th is a momentous day for Sevastopol, for Crimea and for the whole country,” Mr Putin said. He claimed the decision to seize Crimea “demonstrated to ourselves and to the whole world that Russia is capable of protecting itself and its interests . . . We proceed from the interests of our people. This is the basic principle.”

As Ukrainians prepare to vote in presidential elections this month and parliamentary elections in October, Mr Putin insisted that Russia and Ukraine would restore good relations once different politicians took power in Kiev. “I’m sure the Russian and Ukrainian people have never quarrelled . . . We have a lack of understanding only with the leadership of today’s Ukraine,” he said.

In Ukraine, meanwhile, President Petro Poroshenko vowed to restore Kiev’s control over Crimea and the eastern Donbas region, where five years of fighting between government troops and Russian-led militia have killed 13,000 people. Moscow has spent heavily on infrastructure in Crimea since 2014, building a new bridge from the Russian mainland that hinders cargo shipping to Ukrainian ports, upgrading military bases and deploying fighter jets and missiles to the region.

“Crimea has been turned into an impregnable fortress,” said the peninsula’s Kremlin-appointed leader, Sergei Aksyonov, who led a marginal Russian nationalist party in the region before 2014. Yet Russia’s economy has paid a heavy price for Mr Putin’s seizure of Crimea and role in fomenting war in Donbas, acts of aggression that were his response to pro-western politicians taking power in Kiev after a 2014 revolution.

Analysts at Bloomberg Economics estimate that sanctions have wiped up to 6 per cent off Russia’s economy over the last five years, and the United States and European Union pledge to keep the measures in place until Moscow changes course.

“The European Union reiterates that it does not recognise and continues to condemn this violation of international law,” the bloc said in a statement on the anniversary of the annexation. “It remains a direct challenge to international security, with grave implications for the international legal order that protects the territorial integrity, unity and sovereignty of all states.”

Nato on Monday condemned Russia’s militarisation of Crimea and said: “There can be no return to ‘business as usual’ until there is a clear, constructive change in Russia’s actions that demonstrates compliance with international law and its international obligations and responsibilities.”