Palestinians and Israeli troops have clashed in the West Bank as Palestinian families bury their dead after Gaza endured its worst day of violence in years. 57 people were shot by Israeli troops and a baby died of tear gas inhalation in protests.

A Palestinian woman holding her national flag looks at clashes with Israeli forces near the border between the Gaza strip and Israel east of Gaza City. Photograph: Getty Images

The mother of a Leila al-Ghandour, a Palestinian baby of eight months who, according to the Palestinian health ministry, died of tear gas inhalation during violence at the Gaza border on Monday, holds her at the morgue of al-Shifa hospital in Gaza City on Tuesday. Photograph: Mahmud Hams/AFP/Getty Images

International condemnation of Israel’s killing of 59 Palestinian protesters in Gaza escalated as thousands rallied in the coastal enclave on Tuesday to bury the dead from the latest round of violence.

The killings took place on Monday during demonstrations at the Gaza border fence, which coincided with a high-profile ceremony to mark the controversial transfer of the US embassy from Tel Aviv to Jerusalem by the Trump administration that overturned decades of US foreign policy.

As senior UN rights officials condemned the killings as an “outrageous human rights violation” – adding that it appeared anyone approaching the Gaza border fence was liable to be killed by Israeli soldiers – Ireland summoned Israel’s ambassador to protest against the fatalities.

UN Security Council members Russia and China also expressed their concern over the Israeli military’s latest and most serious killings of largely unarmed protesters on the Gaza border, which witnessed its highest death toll since the Gaza war in 2014.

Most of the Gazans who died on Monday were shot by Israeli snipers, Gaza’s health ministry said. According to the Hamas-run ministry, the dead included a baby who died after inhaling teargas along with eight children under the age of 16. At least 2,400 others were wounded.

Summing up the concern of many, the UN rights office spokesman Rupert Colville told reporters in Geneva: “The mere fact of approaching a fence is not a lethal, life-threatening act, so that does not warrant being shot.

“It seems that anyone is liable to be shot dead,” he added, stressing that international laws that apply to Israel make clear that “lethal force may only be used as a measure of last, not first, resort”.

“It is not acceptable to say that ‘this is Hamas and therefore this is OK’,” Colville added, in an apparent dismissal of Israel’s justification for the high casualty levels among Palestinians in clashes along the border.

Israel accuses Hamas, the Islamist group that controls Gaza, of being behind the protests and says it is merely defending its territory. 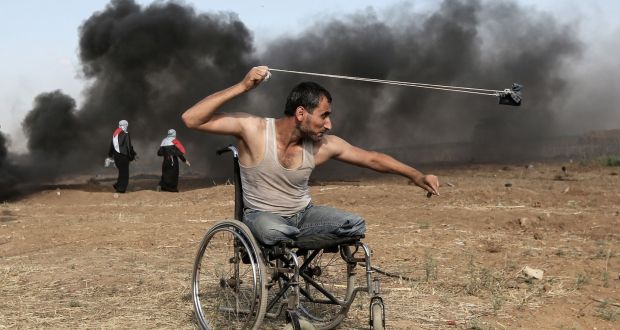 Citing figures from the health ministry and a group of aid agencies, WHO official Mahmoud Daher told the Associated Press on Tuesday that 2,771 people were wounded during Monday’s unrest. Of those, 1,360 were wounded by live fire, 400 from shrapnel and 980 from gas inhalation. He said the majority of those wounded by live fire were struck in their lower limbs.

The UN rights chief Zeid Ra’ad al-Hussein said: “Those responsible for outrageous human rights violations must be held to account.”

The funerals were due to take place on Tuesday, coinciding with the day Palestinians mark the “Nakba”, or catastrophe, commemorating the more than 700,000 people who fled or were expelled from their homes in the 1948 war surrounding Israel’s creation.

As the burials got under way, senior Hamas official Khalil al-Hayya vowed protests in Gaza would continue on Tuesday, while on the West Bank, the Palestinian president, Mahmoud Abbas, declared a general strike after accusing Israel of “massacres”.

But Palestinian protesters turned out in far smaller numbers on Tuesday. Palestinian health officials said that Israeli forces shot and killed a Palestinian near the Gaza border. The 51-year-old man was fatally shot along the frontier in the central Gaza Strip after thousands of Palestinians took part in funerals for Monday’s dead.

The gruesome scenes of lethal violence on Monday were put side by side on the front pages of many of the world’s newspapers with images of the glossy inauguration of Washington’s new mission about 100km away in an affluent Jerusalem neighbourhood.

The US president’s daughter, Ivanka Trump, celebrated the opening to clapping and cheering from American and Israeli VIPs.

Critics of the embassy move, which Mr Trump hailed as a “great day” for Israel, warned that the optics of Monday’s embassy opening and Gaza deaths were damaging Washington’s stature as a mediator between those parties and threatening unpredictable consequences.

“Traditionally we’ve tried to play a role of fireman in the Middle East. Now we’re playing the role of arsonist,” said Ilan Goldenberg, a former state department and Pentagon official who runs the Mideast program at the Center for a New American Security.

Israel’s prime minister, Binyamin Netanyahu, joined the US in blaming Hamas, the Palestinian ruling faction in Gaza, for the deaths. He defended his country’s use of force, saying: “Every country has the obligation to defend its borders”.

The French president, Emmanuel Macron, condemned “the violence of the Israeli armed forces against protesters” in a telephone call with the Palestinian president, Mahmoud Abbas, and Jordan’s King Abdullah II. He also reaffirmed criticism of the US decision to move the embassy to Jerusalem.

Anger at Mr Trump’s December declaration on the embassy helped to ignite the six-week protest movement. To international condemnation, Israeli snipers have regularly fired on demonstrators in past rallies.

Many Israelis have praised the decision to move the diplomatic mission. The Friends of Zion Museum has put up posters in Jerusalem saying: “Make Israel Great Again” and US flags have been hung from buildings in the city. – Guardian

5 Poots suggests NI protocol should be put to a referendum