In a video message, the British prime minister said although she disagreed with Labour on policy issues, they agreed on many Brexit issues. Video: UK Prime Minister Twitter 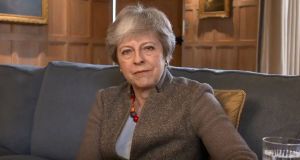 Theresa May has called for compromise in her Brexit talks with Jeremy Corbyn, saying that both the Conservatives and Labour agree on many issues regarding Britain’s withdrawal from the European Union.

In a video message, the British prime minister said although she disagreed with Labour on policy issues, they agreed on many Brexit issues such as ending free movement, leaving with a good deal, protecting jobs and protecting security.

“Can we find a way through this that ensures that we can get a good deal and a deal agreed through Parliament?

“It’ll mean compromise on both sides but I believe that delivering Brexit is the most important thing for us.”

Mrs May said that the UK did not vote for Brexit along party lines and that she felt the public wanted to see their politicians working together more.

Earlier, Mrs May warned that Brexit could “slip through our fingers” unless a compromise deal can be reached with Labour.

She said agreeing a deal could lead to the UK leaving the European Union in six weeks but a failure could result in no Brexit at all.

Labour leader Jeremy Corbyn wants a customs union to be part of a deal and he is also under pressure from his party to insist on a second referendum on any agreement – although that could trigger a revolt by some of his MPs, including senior frontbenchers.

Mrs May faces anger from Conservative Brexiteers over the prospect of the UK’s departure being delayed, with one minister saying that if Britons were required to elect MEPs on May 23rd it would be like writing a “suicide note” for the Tory party.

The UK prime minister heads to Brussels on Wednesday to ask for an extension to June 30, with the possibility of an earlier Brexit day if a deal is agreed – but the EU has signalled it would insist on a longer delay rather than risk repeated requests for extra time.

She said she had done “everything in my power” to persuade Tory and DUP MPs to back her deal but acknowledged the withdrawal agreement had been rejected by the Commons three times and “there is no sign it can be passed in the near future”.

“Because parliament has made clear it will stop the UK leaving without a deal, we now have a stark choice: leave the European Union with a deal or do not leave at all,” she said.

“My answer to that is clear: we must deliver Brexit and to do so we must agree a deal. If we cannot secure a majority among Conservative and DUP MPs we have no choice but to reach out across the House of Commons.

“The referendum was not fought along party lines and people I speak to on the doorstep tell me they expect their politicians to work together when the national interest demands it.

“That is the basis for a compromise that can win a majority in parliament and winning that majority is the only way to deliver Brexit.”

But she warned that “the longer this takes, the greater the risk of the UK never leaving at all”.

“It would mean letting the Brexit the British people voted for slip through our fingers. I will not stand for that,” she said.

Labour has accused Mrs May of refusing to consider changes to the Political Declaration, the document setting out a framework for the UK’s future relationship with the EU.

Mr Corbyn said: “The Labour position is a customs union with the European Union, access to European markets and the retention of regulations for environment, consumers, and workplace rights as a base on which we can build – a dynamic relationship which means we can never fall below them.

“We’ve set all that out. I haven’t noticed any great change in the Government’s position so far. I’m waiting to see the red lines move.”

Tory eurosceptics reacted furiously to the possibility of Mrs May giving in to Mr Corbyn’s demand for a customs union.

Ex-whip Michael Fabricant predicted “open revolt” in the Conservative Party and among Leave voters if Mrs May agreed to the move.

He said: “At a time when conservative members and activists are recoiling in horror at the idea of collaborating with Jeremy Corbyn, the No 10 effort to rehabilitate this awful deal and worse strategy to drive it through seems wholly forlorn.”

The Sunday Telegraph reported that Conservative activists are refusing to campaign for the party and donations have “dried up” because of Mrs May’s leadership.

In a letter to the prime minister, more than 100 current and would-be Tory councillors state that they are unable to muster the volunteers needed to effectively fight next month’s local elections because “belief in the party they joined is gone”.

The prospect of a long extension to the Article 50 process could mean the UK being required to take part in the May 23rd elections to the European Parliament, almost three years after voting for Brexit.

Government minister Nadhim Zahawi issued a stark warning about the “seismic” changes to British politics that would be unleashed if the UK’s delayed departure meant the elections went ahead.

“It would be, I think, a suicide note of the Conservative Party if we had to fight the European elections,” he told BBC Radio 4’s Today.

European leaders will decide on Mrs May’s request at an emergency Brussels summit on Wednesday.

European Council president Donald Tusk is expected to recommend a longer postponement of one year, with a break clause in the case of earlier ratification, in a so-called “flextension” deal.

Mrs May has already obtained one extension to the Article 50 withdrawal process, postponing the date of Brexit from March 29 to April 12.

Chancellor Philip Hammond acknowledged the frustration with the British among the 27 other EU members.

“I understand that EU colleagues are somewhat fed up that the process has taken as long as it has; we are also fed up that we haven’t been able to complete this earlier, but I am very confident that we will get it done.” – PA