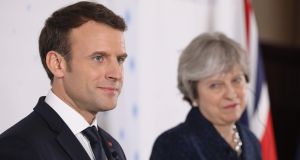 French president Emmanuel Macron has told Britain that its financial services sector cannot enjoy full access to Europe unless it accepts the jurisdiction of European courts and other single market rules. Speaking during a joint press conference with Theresa May at the Sandhurst military academy on Thursday, Mr Macron said the choice lay in Britain’s hands.

“I’m not here to punish or reward. I want to make sure that the single market is preserved because that’s very much at the heart of the European Union. So the choice is on the British side, not on my side. But there can be no differentiated access for financial services. If you want access to the single market, including financial services, be my guest. But it means that you have to contribute to the budget and acknowledge European jurisdiction,” he said.

Britain is hoping to negotiate a deal with the EU that would see differentiated levels of regulatory alignment for different sectors. But Mr Macron said the choice was between full access to the single market, like Norway, or a free trade agreement that covers goods but not services, like Canada.

The two leaders stressed the close security partnership between France and Britain, which they agreed should not be affected by Britain’s departure from the EU.

“Ours is a uniquely close relationship between two of the world’s oldest and greatest democracies. We meet in the year that marks a century since the end of the First World War, when our troops fought side-by-side in defence of our shared belief in freedom and resistance against aggression. And we have been clear again today that as global, outward-looking nations we remain committed to defending our people and upholding our values as liberal democracies in the face of any threat, whether at home or abroad,” Ms May said.

The prime minister agreed to pay France an extra £44.5 million (€52 million) to improve border security.in Calais and other ports along the Channel. The two sides agreed to renew the 2003 Le Touquet deal, which established French border controls in Britain and British controls in Calais.

The deal is especially valuable for Britain, because it means that migrants hoping to cross the Channel are stopped at Calais. Before his election, Mr Macron had threatened to scrap the agreement but on Thursday he settled for more money from Britain and the promise to take in more unaccompanied minors from Calais.

Noting that Britain and France are the only European states with a permanent seat on the United Nations Security Council, the French president stressed that security and defence co-operation would remain vital after Brexit. Britain has agreed to send three RAF Chinook helicopters to help move French troops around Mali. And France said it would send soldiers to support a British-led military mission in Estonia.

“And we are Europe’s two foremost military powers. It is incumbent upon us to demonstrate leadership in meeting the great challenges of our time, and upholding the international rules-based system. We have agreed that UK-France co-operation remains critical to European defence and that together we will continue to play a full role to improve the security of the continent. And today we can confirm that the UK-France Combined Joint Expeditionary Force will be ready to deploy up to 10,000 troops quickly and effectively to face any threat by 2020,” Ms May said.

As a gesture of goodwill, Mr Macron agreed to send the Bayeux tapestry, which depicts the Norman invasion of Britain in 1066, across the channel for the first time in 900 years.