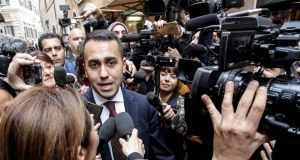 epaItaly’s Five Star Movement leader Luigi Di Maio is surrounded by the media as he leaves the parliament building in Rome on Wednesday. Photograph: Giuseppe Lami/EPA

Italy’s two anti-establishment parties agreed the basis for a governing accord on Thursday that would slash taxes, ramp up welfare spending and pose the biggest challenge to the European Union since Britain voted to leave the bloc two years ago.

Leaders of the far-right League and the Five Star Movement, which emerged as two of the biggest parties from an inconclusive election on March 4th, have been discussing a common policy agenda to form a coalition government and end more than 10 weeks of stalemate.

When Five Star leader Luigi Di Maio emerged from a four-hour meeting with League chief Matteo Salvini, he said the two parties had to hammer out a few “minor details” and that the programme should be finalised later in the day.

Moments earlier, a Five Star source had said the programme had been substantially agreed and that it contained no reference to a possible exit from the euro or “anything that could cause any concern regarding Italy’s euro membership”.

The accord has yet to be made public and still needs to be ratified by both parties’ members, as well as gaining approval from Italy’s president. The parties had made progress on agreeing a prime minister, Mr Di Maio said, but he did not give a name.

A draft of the accord reviewed by Reuters earlier on Thursday spelt out a spending plan that would breach EU rules on fiscal discipline: cutting taxes, increasing welfare payments for the poor and scrapping an unpopular pension reform.

The policies would cost many billions of euro and have spooked investors in Italian debt, shares and the euro. Italy is the euro zone’s third-largest economy.

In a direct challenge to EU fiscal rules, the draft accord also called for the bloc to create fiscal headroom for spending by adjusting the formula used to calculate Italy’s debt burden, which the rules say must be reduced.

In calculating debt as a proportion of gross domestic product – Italy’s ratio of more than 130 per cent is second only to Greece in Europe – the draft accord proposes discounting hundreds of billion euro in Italian debt purchased by the European Central Bank under the bank’s quantitative easing (QE) programme.

On Thursday, the EU’s statistics office said it cannot exclude Italian bonds held by the ECB from its debt calculations.

News of the draft accord has caused concern in Brussels, where European Commission vice president Valdis Dombrovskis told the European Parliament on Thursday that Italy’s new government should stick to fiscal discipline and keep reducing public debt.

“This is our message to the new government. It’s important to stay the course,” Mr Dombrovskis said.

Italy’s borrowing costs have been rising as details of the accord emerge. The gap between the yields on Italy’s benchmark bonds and safer German bonds was at its widest since early January as Italian 10-year bond yields were set for their biggest two-day jump since March last year.

Outgoing prime minister Paolo Gentiloni told a meeting of EU leaders in Bulgaria that he and other leaders were worried that fundamental issues such as the need to safeguard public accounts were now up for political discussion.

The draft pact proposed a new “universal income” for the poor costed at €17 billion, while it said a planned softening of an unpopular pension reform would cost €5 billion.

The plan promised to introduce a 15 per cent flat tax rate for businesses and two tax rates of 15 and 20 per cent for individuals – a reform long promoted by the League. Economists say this would cost well over €50 billion in lost revenues.

There was still no word on the thorny issue of who would be prime minister. Neither Mr Salvini nor Mr Di Maio wants the other to get the job.

President Sergio Mattarella, who has repeatedly stressed the importance of maintaining a strong, pro-European stance, may also be dismayed at the deal the League and Five Star come up with.

Each party plans to consult its supporters over the weekend to see if they back the nascent government pact. The policy programme will probably be published on Thursday, Five Star said. – Reuters