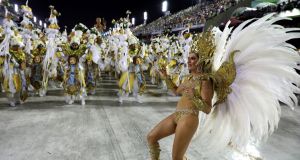 Carnival 2021 has been indefinitely postponed due to the coronavirus pandemic, according to official. Photograph: Fabio Motta/EPA

Rio de Janeiro’s annual Carnival parade has been delayed for the first time in a century as Brazil continues to battle the coronavirus pandemic, officials said.

The president of Rio’s League of Samba Schools announced the spread of Covid-19 had made it impossible to safely hold the traditional parades in February which are a cultural mainstay and, for many, a source of livelihood.

Rio’s City Hall has yet to announce a decision about the Carnival street parties that take place across the city, though some have already cancelled.

Brazil’s first confirmed coronavirus case was on February 26th, one day after this year’s Carnival ended.

As the number of infections grew, the samba schools that participate in the glitzy annual parade halted preparations for the 2021 event, with Thursday’s announcement removing the cloud of uncertainty that has hung over the city. –Reuters