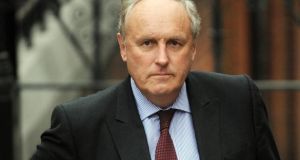 Paul Dacre is said to be Boris Johnson’s preferred candidate for the job of Ofcom chairman.

A former editor of the Daily Mail has been tipped to become chairman of the broadcast regulator Ofcom.

Paul Dacre, who stepped down from the helm of the newspaper in 2018, is said to be Boris Johnson’s preferred candidate for the job.

The Sunday Times reported that Dacre was “wooed” by the British prime minister over drinks in Downing Street in February, and is now in talks with Number 10.

During his editorship of the Daily Mail, Dacre was critical of the BBC — which he would regulate if he was made Ofcom chairman.

The Sunday Times also reported that Charles Moore, the former editor of the Daily Telegraph, has been asked to take up the post of BBC chairman.

Ofcom chairman Terence Burns is due to leave before the end of the year, while BBC chairman Sir David Clementi will stand down in February.

Mr Moore has previously criticised the criminalisation of people who refuse to pay the licence fee.

A UK government spokeswoman said the processes are yet to open.

“We will launch the application process for the new chair of the BBC shortly,” she said.

“It is an open recruitment process and all public appointments are subject to a robust and fair selection criteria.”

Shadow culture secretary Jo Stevens said: “Throughout this crisis, one of Boris Johnson’s overriding priorities has been handing out cushy jobs, public contracts and taxpayers’ cash without proper scrutiny.

“People are worried about their jobs and health. The prime minister should be showing the leadership our country needs, not seeking undue influence over our independent institutions.”