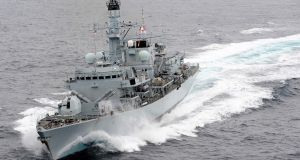 The Royal Navy’s HMS Montrose is pictured at speed in the Mediterranean Sea during an excercise in 2012. Photograph: Reuters

A Royal Navy warship has rebuffed an attempt by Iran to “impede” the passage of a British oil tanker through the Strait of Hormuz, escalating already high tensions in the Gulf.

In apparent retaliation for the seizure of an Iranian vessel by the UK last week, three Iranian gunships tried on Wednesday to disrupt the journey of the British Heritage, owned by energy group BP, through one of the world’s most important oil transportation routes, UK officials said.

The incident came on the same day that Hassan Rouhani, Iran’s president, warned the UK that it would face “consequences” for impounding the Iranian tanker. It will raise concerns within the oil industry about commercial vessels being targeted in the Gulf – six tankers were hit by sabotage attacks off the coast of the United Arab Emirates in May and June.

“We are concerned by this action and continue to urge the Iranian authorities to de-escalate the situation in the region,” they said.

Mohammad Javad Zarif, Iran’s foreign minister, said the British “claims” were “worthless” and only made “to create tensions”.

Iran’s Revolutionary Guard, which has in the past been accused of harassing ships using patrol boats fitted with guns, also denied approaching any British tankers. But the guards added that if there were orders to stop a tanker the elite force would do so “without hesitation, decisively and quickly”.

Iranian officials have been threatening to disrupt the flow of oil and petrochemicals through the Gulf since President Donald Trump unilaterally withdrew the US from the 2015 nuclear deal Tehran signed with world powers, and imposed crippling sanctions on the Islamic republic.

Iran threatened UK shipping after Royal Marines and Gibraltar police last week seized the Grace 1 supertanker because it was suspected of smuggling Iranian oil to Syria in violation of EU sanctions.

UK officials insisted the decision to apprehend the Grace 1 off the coast of Gibraltar, a British overseas territory, was in relation to the embargo on Syria and not the Trump administration’s sanctions on Iran. But Tehran perceived Britain to be acting at the behest of the US, with Iranian leaders accusing the UK of piracy.

Iranian officials have said EU sanctions apply only to the bloc’s members and not Iran. Tehran also denied the tanker’s final destination was Syria, where Iran backs the Assad regime in the Arab country’s eight-year war.

Since the Grace 1 was seized, the UK’s navy, which has a base in Bahrain, has been providing “maritime overwatch” for British vessels as a precautionary measure, said a defence ministry spokesman.

The UK raised its threat alert for ships travelling through Iranian waters to its highest level on Tuesday. Between 15 and 30 British-flagged commercial are understood to travel through the Gulf on any given day.

The US and UK have blamed Iran for the sabotage attacks on the tankers in the Gulf in May and June.

Iran dismissed those allegations and suggested those attacks were false-flag operations carried out by its enemies to implicate the Islamic republic. Iranian forces then shot down an unmanned US spy drone that Tehran said had entered the republic’s territory.

BP declined to comment on this week’s incident. When asked about rising geopolitical tensions in the Gulf at an event late on Wednesday, Bob Dudley, BP’s chief executive, said: “We just have to be really careful about our ships.”

About a third of the world’s seaborne oil travels through the Strait of Hormuz. The US has said it hopes to create an alliance to provide maritime security in the Gulf.

“Iran’s actions so far have been primarily about posturing and reminding everyone that it can engage in tit-for-tat,” said Emile Hokayem, a Middle East security expert at the International Institute for Strategic Studies. “The Iranian response is still calibrated: there has been no loss of life and it’s always presented or seen as in reaction to something.”

But he added that while single incidents could be “rationalised” or “minimised,” over time, western governments, including those inclined to give Iran some space and to blame the US for the escalation, “will look at the broader pattern and assess things are reaching a new level of danger”.

Britain does not support the US decision to withdraw from the nuclear deal and impose sanctions on Iran. It has been working with France and Germany, the other European signatories to the nuclear accord, to save the agreement and de-escalate tensions. But those efforts are being complicated by the diplomatic dispute triggered by the detention of the Iranian tanker.

Tehran has already increased its atomic activity above limits set in the nuclear accord in a bid to pressure the European signatories, known as the E3, to take concrete steps to counter the economic impact of the US sanctions, particularly its ability to export oil.

The Trump administration’s punitive measures have caused Iran’s oil exports to fall from a high of 2.8m barrels a day in May last year, to below 500,000 bpd, market analysts estimate. – Copyright The Financial Times Limited 2019