Johnson still plotting a cautious route despite the optimistic tone 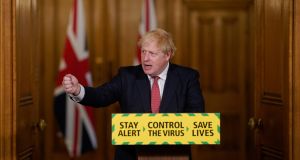 Boris Johnson: his suggestion that social distancing restrictions could all be over by Christmas drew irresistible comparisons with the ill-placed optimism of the early months of the first World War. Photograph: Andrew Parsons/EPA

Boris Johnson’s suggestion that social distancing restrictions could all be over by Christmas drew irresistible comparisons with the ill-placed optimism of the early months of the first World War. But his message was for the most part a cautious one and the next steps in easing the lockdown are contingent on coronavirus remaining under control.

Johnson hopes that the combination of an improved test and trace system and more powers to impose local lockdowns will allow him to avoid restoring restrictions on a national scale.

He claimed on Wednesday that Britain’s test and trace system was “as good as or better than anywhere else in the world”. But it is only reaching three out of four of those who test positive and the authorities don’t know how many people told to self-isolate after being in contact with an infected person actually do so.

The prime minister announced new powers for ministers and local councils to impose localised lockdowns in response to outbreaks of the virus. But although Leicester’s lockdown, which is still in place, has been successful in reducing the level of infection it has also been unpopular.

The city’s mayor has accused the government of taking a “sledgehammer approach” by closing the entire city when the outbreak is confined to a small part of it.

Johnson’s announcement that the advice to work from home if possible will be dropped came less than 24 hours after chief scientific adviser Patrick Vallance said it should remain in place. But the prime minister drew back from telling people to return to work if possible, instead leaving it up to employers to make their own arrangements.

“Whether people should go into work, whether they need to go into work, is not something the government can decide,” he said. “We have learned all sorts of lessons in the last few months about the wonders of Zoom and muting and un-muting . . . but in the end face-to-face conversations are important.”

Employers’ groups and unions called for more clarity and London mayor Sadiq Khan said people should not go back to work in such a way that would leave public transport crowded.

Anxiety about using public transport is one reason employees in London cite for wishing to continue to work from home. And many businesses facing the extra cost of making their workplaces Covid-secure will need more than a prime ministerial nudge to tell their staff to come back to the office next month.