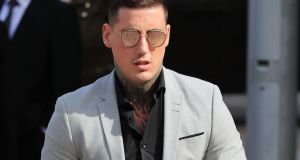 Irish reality TV star Jeremy McConnell has been found guilty of assaulting ex-girlfriend Stephanie Davis after an attack she said made her fear for her life.

McConnell was found guilty at Liverpool Magistrates’ Court on Monday of assaulting Ms Davis at her home in Rainhill, Merseyside, on March 10th.

The pair, who began a relationship after appearing on Celebrity Big Brother together, argued during the hearing at Liverpool Magistrates’ Court, as Ms Davis told the court how McConnell had “completely destroyed” her life.

Judge Wendy Lloyd ordered a break in proceedings when McConnell began laughing in the dock after Ms Davis broke down in tears.

The former Hollyoaks actor said: “He’s completely destroyed my life, it’s been the worst 18 months of my life.”

She told the court the couple had been out for a meal in Liverpool with friends to celebrate her birthday on the evening of March 9th before returning to her home, but McConnell then went out to a local pub with two of the friends.

She said when he returned to the house at about midnight he was “out of it” and had been taking cocaine.

The couple’s friends left and she said McConnell then grabbed her by the face.

She said: “He was calling me a slag. He said that I was fat, he said that no one was going to want to touch me again.”

She added that McConnell took her phone from her as she tried to call for help, then pushed her and bit the inside of her arm.

The court was shown photos of a bruise she said was caused by the bite, as well as extensive bruises to her legs and body.

Ms Davis said McConnell left the house but later returned and began kicking the doors in an attempt to get in.

She said: “I heard him go over the gate, it was literally like a horror film. I just thought: ‘This is it, he’s going to kill me.’”

She said she let him in after fearing he would smash the glass patio doors and he followed her upstairs, where she was in the bedroom, and threw her on to the bed.

She said: “Every time I got up he got me by the face and threw me down forcefully.”

She said he punched her to the side of the head and pushed her against the wall twice.

He had accused her of having affairs with her pregnant friend and with a fireman who lived nearby.

Ms Davis said McConnell, who she described as “psychotic”, left the house but returned again, this time snapping handles off the patio doors of the house to get in.

She told the court the 27-year-old was apologetic about his earlier behaviour and threatened to smash a bottle of wine over his own head.

Her mother then arrived, having been called by a friend of Ms Davis.

Ms Davis said: “He went to smash the bottle of wine over his head and that was just when my mum knocked at the door and it was the biggest relief of my life because I genuinely thought that was it.”

Ms Davis denied making a complaint to police, three days after the incident, in a bid to prevent McConnell appearing on TV show Ex On The Beach.

Asked if McConnell was the love of her life, she said: “No, not at all.

“I thought he was; I really, really did love Jeremy. Now I realise it’s not love, you don’t do things he has done to the mother of your child.”

She said the couple used to argue about his drug use and claimed he spent £180,000 on cocaine last year.

McConnell told the court Ms Davis had attacked him after learning he had taken cocaine.

He said he pushed her away in self-defence and claimed injuries shown in photos were “self-inflicted”.

He said: “I’ve seen her hurt herself.”

James Morris, defending, said: “She is aggrieved that he actually ended their relationship some six weeks ago.”

The judge told him he would be sentenced later on Monday and warned him custody was a possibility.