Donald Trump calls for ‘security and peace’ during trip to Israel 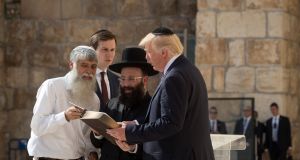 US president Donald Trump receives a Book of Psalms from Shmuel Rabinovitch, as Jared Kushner, Trump’s son-in-law and senior adviser, looks on, during a visit the Western Wall in Jerusalem. Photograph: Stephen Crowley/The New York Times

US president Donald Trump, arriving in Israel on Monday from Saudi Arabia, declared his visit a “rare opportunity to bring security and peace” to the Middle East.

“On my first trip overseas as president, I have come to this sacred and ancient land to reaffirm the unbreakable bond between Israel and the United States, ” he said, after being welcomed by Israeli prime minister Binyamin Netanyahu and Israeli president Reuven Rivlin.

“We have before us a rare opportunity to bring security and stability and peace to this region and to its people, defeating terrorism and creating a future of harmony, prosperity and peace. But we can only get there by working together,” he said.

Mr Trump has called an Israeli-Palestinian peace agreement “the ultimate deal” but US officials played down prospects of a dramatic announcement during this trip on a resumption of peace talks between the sides after more than three years of diplomatic deadlock.

A Palestinian source who spoke on condition of anonymity said that energetic preparations were under way to convene an international peace conference this summer. He said the conference would launch talks aimed at clinching an elusive peace deal within 18 months and would include a timetable for establishing full normalised relations between Israel and the Arab world.

Mr Trump reportedly rejected a Palestinian demand to link a resumption of peace talks with an Israeli settlement freeze in the West Bank.

It appears the president has agreed to the Palestinian and Arab demand to postpone any decision on moving the US embassy from Tel Aviv to Jerusalem, despite making such a move a key policy pledge during the presidential election campaign. Mr Trump must decide by the end of the month whether to sign a presidential waiver that would keep the embassy in Tel Aviv.

A few hours before Mr Trump’s arrival, the Israeli security cabinet approved a series of confidence-building measures, including allowing the Palestinians to build in area C of the West Bank, which is under full Israeli control. Until now, this area had been largely off limits to Palestinian development.

The most important part of the visit from Israel’s point of view was Mr Trump’s visit to the Western Wall in Jerusalem’s Old City, which was sealed off for the occasion. He prayed at the wall and placed a note inside the crevices, becoming the first serving US president to visit Judaism’s holiest site.

His daughter Ivanka, a convert to Judaism, and first lady Melania prayed separately in the women’s section.

Mr Trump also addressed the question of Iran, saying Tehran must never be allowed to acquire a nuclear potential.

“Most importantly, the United States and Israel can declare with one voice that Iran must never be allowed to possess a nuclear weapon – never, ever – and must cease its deadly funding, training and equipping of terrorists and militias, and it must cease immediately,” Mr Trump said.

Referring to the recent intelligence leak to Russian officials at the White House, Mr Trump said he never mentioned Israel.

Palestinians protested across the West Bank on Monday in solidarity with militant prisoners who have been on hunger strike in Israeli jails for more than a month. Clashes occurred at a number of locations and a Palestinian man was shot and killed after attempting to stab police officers in east Jerusalem. On Tuesday Mr Trump will travel to Bethlehem where he will hold talks with Palestinian president Mahmoud Abbas.

Before departing Israel for the Vatican, Mr Trump will visit the Yad Vashem Holocaust museum and deliver a speech at the Israel museum.

1 Miriam Lord: The left limbers up to woo Mary Lou
2 ‘I don’t know if he died . . . but I don’t want him in the Tuam tanks’
3 Election 2020: Government officials express concern over pension reform promises
4 Eyewitness to Auschwitz: ‘We were held in the wagons like animals’
5 New coronavirus is increasingly likely to spread to EU, health bodies warn
Real news has value SUBSCRIBE