Labour must ‘clarify its position on principle of consent’, says DUP’s Jeffrey Donaldson 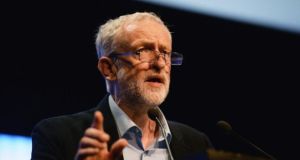 Asked whether he supported unification during an interview with the New Statesman current magazine, Mr Corbyn answered, “it’s an aspiration that I have always gone along with”.

Mr Corbyn has long been in favour of a united Ireland. In 1984 he invited Sinn Féin leader Gerry Adams to a meeting in London and cancelled a second meeting in 1996 after coming under pressure from Labour party colleagues.

In 1985 he opposed the Anglo Irish Agreement, saying “the agreement strengthens rather than weakens the border between the six and the 26 counties, and those of us who wish to see a united Ireland oppose the agreement for that reason”.

The new Labour leader appointed John McDonnell, who said in 2003 that IRA members should be honoured for bringing the British government to the negotiating table, as shadow chancellor.

Mr McDonnell apologised for the remarks during an appearance last week on BBC’s Question Time.

Mr Corbyn’s support for a united Ireland has been branded “unhelpful” to the Northern Ireland peace process.

Although unsurprised at his position, unionists have on Thursday called for on Labour to clarify its position.

Democratic Unionist MP Jeffrey Donaldson said: “Nothing Jeremy Corbyn says about Northern Ireland is going to be helpful or is designed to be helpful.

“What we now need is for the Labour Party to clarify its position on the principle of consent, and Jeremy Corbyn needs to make clear whether he stands by the agreements made by Tony Blair which put the issue of consent at the heart of the constitutional arrangement in Northern Ireland.”

Under the terms of the Belfast Agreement, a united Ireland can only be brought about with the majority consent of people in Northern Ireland and the Republic of Ireland.

The Ulster Unionist Party said it had been assured that Labour was committed to the principles of consent when officials met shadow Northern Ireland secretary Vernon Coaker earlier this week.

Tom Elliott MP said: “He was very clear that Labour is committed to the consent principle as set out in the Belfast Agreement. Indeed he has also been unambiguous in the House of Commons that this is the position.

“What we have here is a party leader who is out of step with his own party’s position.”

The UUP has requested a meeting with Mr Corbyn.

A spokesman said: “Jeremy Corbyn has been a long-time friend of Ireland and of the peace process.”

Foyle MP Mark Durkan said: “Jeremy Corbyn is stating a view held by many in the Labour Party in regards to a united Ireland, and one that reflects an aspiration of the SDLP.

“It has always been a key tenet in our party constitution and one that is based upon the principle of consent.”