The leader of Britain's opposition Labour Party refuses to quit as his party turns on him, while in the Conservative contest for leadership, contenders are set to declare their intentions. Video: Reuters 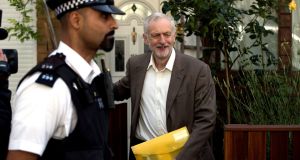 Police escort Labour leader Jeremy Corbyn from his home in London. Mr Corbyn is facing increased calls to resign as leader after a vote of no confidence saw 172 MPs vote against him. Photograph: Carl Court/Getty Images

Jeremy Corbyn faces a leadership challenge after Labour MPs backed a motion of no confidence in him by a margin of four to one and more than 50 shadow ministers resigned from his front bench. As many as 172 MPs supported the no-confidence motion, with 40 voting against it. In a statement after the vote, Mr Corbyn said he would not resign, dismissing the motion as having no constitutional legitimacy.

“I was democratically elected leader of our party for a new kind of politics by 60 per cent of Labour members and supporters, and I will not betray them by resigning,” he said. “Today’s vote by MPs has no constitutional legitimacy. We are a democratic party, with a clear constitution. Our people need Labour party members, trade unionists and MPs to unite behind my leadership at a critical time for our country.”

Shadow business secretary Angela Eagle is expected to challenge Mr Corbyn for the leadership on Wednesday if he does not resign overnight. A challenger will need the backing of 50 MPs to trigger a contest, which will be decided by an electoral college dominated by ordinary party members.

There is competing legal advice about whether Mr Corbyn will automatically appear on a leadership ballot if he fails to win the minimum number of nominations from MPs required for a challenger. Mr Corbyn’s allies say their legal advice says that the leader is automatically entitled to be on the ballot but his rivals say their advice says the opposite.

Former shadow education secretary Lucy Powell said that instead of fighting a leadership contest, Mr Corbyn should heed the no confidence motion and step aside. “If Jeremy is to show any leadership quality at all, he must now reflect and respond to this overwhelming and unprecedented indication from the parliamentary Labour Party which includes all wings and all groupings,” she said.

Many Labour MPs believe that Mr Corbyn’s support among party members has been eroded in recent months and that unhappiness over his role in the referendum may have accelerated that trend. However the party leader can still call on heavyweight support among union leaders, notably from Len McCluskey, head of Unite, the party’s biggest financial backer.

“If anyone wants to change the Labour leadership, they must do it openly and democratically through an election, not through resignations and pointless posturing,” Mr McCluskey said on Tuesday. “If there has to be such an election, Jeremy Corbyn’s supporters throughout the movement will be ready for it.”

Labour MPs have criticised Mr Corbyn’s low-key role in the EU referendum campaign, blaming him for the party’s failure to motivate enough of its supporters to block Brexit. He insisted on Tuesday that Labour had been electorally successful under his leadership, emerging as the largest party in this year’s local elections and with two out of three of the party’s supporters voting against Brexit.

“The government is in disarray. Ministers have made it clear they have no exit plan, but are determined to make working people pay with a new round of cuts and tax rises,” the Labour leader said. “Labour has the responsibility to give a lead where the government will not. We need to bring people together, hold the government to account, oppose austerity and set out a path to exit that will protect jobs and incomes. To do that we need to stand together. Since I was elected leader of our party nine months ago, we have repeatedly defeated the government over its attacks on living standards.”

A leadership contest less than a year after Mr Corbyn’s emphatic victory last September could tear Labour apart, with the leader’s most ardent supporters determined to resist what they view as a coup by MPs.

The struggle for dominance between Labour’s membership and its MPs in the early 1980s led to the formation of the Social Democratic Party under Roy Jenkins, Shirley Williams and David Owen. Some MPs fear that a second victory for Mr Corbyn could see the party splitting again.