‘It has been the privilege of my life to serve Scotland’ 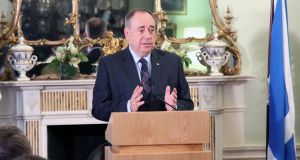 After the referendum defeat, Alex Salmond said it was time for a new leader who could now take the devolution process forward. Photograph: PA

For Scottish leader Alex Salmond, the journey started with tales from his granddad about repelling the English invaders in the 14th century. It ended today with his resignation as leader of the country’s nationalists after losing the independence vote he demanded.

Salmond (59), told reporters in Edinburgh that he won’t seek re-election as Scottish National Party leader at its annual conference in Perth on November 13th to 15th, and will stand down as Scottish first minister after party members choose a new leader.

“It has been the privilege of my life to serve Scotland as first minister,” Salmond said. “But as I said often during the referendum campaign this is not about me or the SNP. It is much more important than that.”

After counting through the night, about 55 per cent of Scottish voters supported the “no” campaign compared with 45 per cent who backed Salmond’s independence bid. Whatever happens next, Salmond has left his mark on Scotland indelibly after a grueling two-year campaign leading up to yesterday’s vote.

“This was his life’s work,” said Tim Bale, professor of politics at Queen Mary University in London. “He’s been in the job an awfully long time and it’s hard to see what he personally could do apart from negotiate a new settlement.”

With the outcome too close to call up until the eve of the ballot, Salmond managed to wring pledges of more powers for Scotland come what may from prime Minister David Cameron and the main UK parties. He said today the next step for the Scottish government is to ensure that happens.

While on the losing side, he brought the country’s people together in the greatest show of political engagement seen in generations in Scotland, only to divide them on the country’s future, while inspiring self-determination movements in Spain, Belgium and Italy.

“He’s started something that has changed the political landscape,” said Matt Qvortrup, senior researcher at Cranfield University and author of Referendums and Ethnic Conflict. “He redefined nationalism. It was a party that was nowhere near power and suddenly they had a referendum.”

While the margin of Salmond’s defeat was greater than recent polls predicted, it compares with a deficit of about 20 points as recently as early August. Away from the arguments over debt, oil revenues and health spending, or the bickering over who has the right to use the pound, the stark contrast between the two campaigns was the mobilization of supporters on the ground.

Go to any neighborhood, and “yes” posters outnumbered those with “no” by at least two-to-one, as Salmond and members of the pro-independence movement mobilized their followers. In the end it wasn’t enough.

“We’ve been campaigning twice a week since 2012, and every night the last six months,” said Martyn Day, who was recruited into the SNP at the age of 18 by Salmond’s brother. “I’ve lost four inches off my waist. I look like I’m just out of prison. I don’t have a pair of trousers that fit me.”

Day (43) spoke before the vote a few doors down from Salmond’s original family home in Linlithgow as he prepared to go out campaigning again. His Citroen Berlingo minivan was rigged up with loudspeakers, and like his house, every window had a “yes” sticker or poster.

Since the SNP won elections to the semi-autonomous Scottish Parliament in 2007, Salmond turned what was seen at Westminster as a little more than a local irritant into a movement that threatened to pull off the biggest upset in British history.

In 2009, just as Europe was about to be awoken by a financial crisis that occupied governments for four years, Salmond published an initial blueprint for independence and a referendum.

With a minority government in Scotland, the bill was defeated. Two years later, it was back on the agenda after Salmond led the SNP to a majority in the Edinburgh legislature after trouncing the Labour Party, traditionally the strongest political movement in Scotland.

In October 2012, he and Cameron signed the Edinburgh Agreement paving the way for the vote. The “yes” side consistently lagged behind in opinion polls, and in August, an unusually nervous Salmond lost the first televised debate to former Labour Chancellor of the Exchequer Alistair Darling, who fronted the anti-independence Better Together campaign.

In a second head-to-head he roared back, causing a narrowing in opinion polls that prompted the pound to plunge as the referendum became too close to call.

“He’s led his troops to the top of the hill,” Jim Wallace, who served as deputy first minister of Scotland from 1999 to 2005, said in an interview last night with Sky News. “It’s difficult to march them down again.”

The military analogy fits with the history of Salmond’s hometown. Linlithgow Palace, a castle that served as a royal residence, was taken back from King Edward II’s army by Robert the Bruce in 1313 during the Wars of Independence. Mary Queen of Scots was born there in 1542.

Salmond would recall in interviews how as a young lad in Linlithgow, a town about 30 kilometers west of Edinburgh, the stories led to his thirst for history and ultimately Scottish nationalism.

Salmond was born in the town on New Year’s Eve 1954, the second of four children to two civil servants. He grew up on Preston Road, down the street from St Ninian’s church, where his mother was an elder, and the town’s oldest pub.

He studied economics and history at St Andrews University. Founded in 1413, its luminaries include Benjamin Franklin, the American founding father who traveled to St Andrews for an honorary law degree in 1759.

Salmond went on to join Royal Bank of Scotland Group Plc as an oil analyst. A lifelong fan of Edinburgh soccer club Heart of Midlothian, Salmond used to write a regular column about horseracing for the Scotsman newspaper.

It’s the legacy of his paternal grandfather that’s had the greatest effect on Scotland. “My granddad used to take me round all the nooks and crannies of Linlithgow,” Salmond said in an interview in his office in April 2012. “He wanted me to have a Scottish attitude to the world, and I think he managed it.”