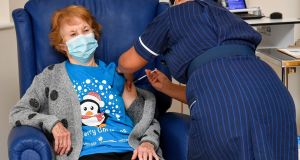 As the rollout of the vaccine began across Northern Ireland and Britain on Tuesday morning the first administration of the vaccine happened in England where Margaret Keenan, who turns 91 next week, was immunised.

Ms Keenan, a native of Enniskillen, Co Fermanagh, said it was the “best early present” she could have received.

Not long after that first vaccination, at the Royal Victoria Hospital in Belfast, Joanna Sloan, a nurse who will be in charge of the vaccination programme in Belfast, received the vaccine just after 8am.

Ms Sloan, a mother of a five-year-old daughter, said she felt emotional and proud to be part of history.

Ms Sloan said she found out on Friday that she would be the first to receive the vaccine in Northern Ireland. She said she felt “privileged”.

Ms Sloan is engaged, but her wedding was postponed due to Covid-19. She is due to get married in April next year.

“I feel privileged and honoured and a little bit emotional that we have got here – very, very grateful,” said Ms Sloan, who is from Dundrum, Co Down.

“Through everything that healthcare workers [went through], either in hospital or [the] community – people themselves losing family members, us losing colleagues – it felt like it was a huge moment and that this was and could possibly be the final hurdle in the fight against Covid,” she added.

Enniskillen woman Ms Keenan, who only retired from job in a jewellers four years ago, was vaccinated in hospital in Coventry at 6.31am.

“It was fine, I wasn’t nervous at all,” said the mother-of-two. “To tell you the truth I got this opportunity of doing it, and I was in hospital. It was a great opportunity,” she said

“I know that one or two people on my ward are going to wait and have it done by the doctor, but because it was available for me today [I did it],” added Ms Keenan.

“I don’t mind the [media] attention, it doesn’t bother me. I’m just happy to have it done,” she said.

Ms Keenan, known to family and friends as Maggie, received the jab from nurse May Parsons.

“I can’t thank May and the NHS staff enough who have looked after me tremendously, and my advice to anyone offered the vaccine is to take it – if I can have it at 90 then you can have it too.”

Ms Keenan has lived in Coventry for more than 60 years. She will receive a booster jab in 21 days to ensure she has the best chance of being protected against the virus.

Ms Parsons said it was a “huge honour” to be the first in the country to deliver the vaccine to a patient.

The first vaccinations took place on a day when the North’s health department reported 14 more coronavirus deaths taking the toll to 1,073.

Hospital bed occupancy was at 102 per cent. There were 421 patients receiving Covid-19 treatment in Northern Ireland hospitals with 28 in intensive care and 20 on ventilators.

The North’s chief medical officer, Dr Michael McBride, said it was a remarkable day. “We can begin to look to the future with a degree of optimism, with this vaccine and other vaccines and more effective treatments,” he said.

“Hopefully in the future Covid-19 will become a more manageable disease and we will begin the pathway to a more normal life,” he added.

The Northern Ireland vaccination programme will take place at seven centres around the North – at the Royal Victoria Hospital and the Ulster Hospital in Dundonald in east Belfast, and at five leisure centres. The centres will operate 12 hours a day, seven days a week.

A total of 980 vaccinators are first in line to receive the jabs. There are also 770 people who have volunteered to become vaccinators, and they are likely to be high up the queue.

Special mobile units also are being established so that vulnerable care home residents and staff also can receive the vaccine.

Under the UK shared-allocation of the vaccine Northern Ireland initially will be entitled to 25,000 phials of the Pfizer/BioNTech vaccine. As it is a two-jab inoculation that will entitle about 12,000 of the most vulnerable to get the vaccine before Christmas, said the North’s Minister of Health Robin Swann.

Mr Swann said that that care-home residents also would be prioritised in the first phase of the programme.

“A heartfelt thank you goes to everyone who has made this a reality – the scientists and doctors who worked tirelessly, and the volunteers who selflessly took part in the trials. They have achieved in months what normally takes years.

“My colleagues across the health service are rightly proud of this historic moment as we lead in deploying the PfizerBioNTech vaccine.

“I also want to thank Margaret, our first patient to receive the vaccine on the NHS.

“Today is just the first step in the largest vaccination programme this country has ever seen. It will take some months to complete the work as more vaccine supplies become available and until then we must not drop our guard. But if we all stay vigilant in the weeks and months ahead, we will be able to look back at this as a decisive turning point in the battle against the virus.”

The life-saving vaccine is typically delivered by a simple injection in the shoulder but there is a complex logistical challenge to deliver from the manufacturers to patients. It needs to be stored at -70 degrees before being thawed out and can only be moved four times within that cold chain ahead of use. – Additional reporting PA