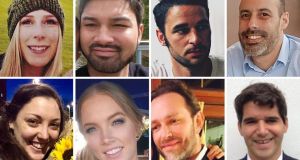 Inquests into the deaths of five of the eight victims killed in the London Bridge terrorist attack have opened at Southwark coroner’s court.

The hearings, to formally open the inquests, were then quickly suspended while police continued extensive investigations into the attack that killed eight people and left 48 injured.

The senior coroner, Andrew Harris, offered his “thoughts and condolences” to the families of the victims, who were killed on Saturday, June 3rd as three men, Khuram Butt, Rachid Redouane and Youssef Zaghba, unleashed terror on London Bridge and nearby Borough Market in central London.

Just before 10pm, the terrorists shattered the bustling atmosphere in one of London’s favourite night spots. Driving a hired van, they careered into pedestrians on London Bridge, veering across the road wildly and mounting the kerb. When it came to a stop they jumped out of the van and – armed with knives – set upon their victims, stabbing people indiscriminately in and around bars and restaurants around Borough Market.

Three French citizens, two Australians, one Canadian, a Spanish national and one Briton died that night, with a further 48 injured, some needing life-saving operations in the days that followed.

In Southwark coroner’s court on Tuesday, Harris offered his condolences to Julie Wallace, the mother of Sara Zelenak, who was in court. “All of our thoughts and condolences are with you at this terrible time,” he said. “One of the most horrible things is for parents to be in court hearing the details of a death, particularly a violent one, of their children.”

Representatives from the Spanish consulate also attended on behalf of the family of Ignacio Echeverría. The inquests into the remaining three victims – Canadian Christine Archibald and Frenchmen Xavier Thomas and Alexandre Pigeard – will open on Wednesday.

The court heard that Zelenak, believed to have been separated from friends in the chaos, was killed by a “stab wound to the neck” on Borough High Street.

Kirsty Louise Boden, a senior staff nurse, was killed in Montague Close after she ran towards the danger to help people. The coroner said she was killed in the vicinity of Southwark Cathedral by an “incised wound to the chest”.

Banker Ignacio Echeverría, from Az Pontes a Coruna in northwest Spain, was killed on London Bridge after trying to defend a woman with his skateboard. He was killed by a “stab wound to the back”.

Frenchman Sebastien Belanger, originally from Angers, western France, was drinking at the nearby Boro Bistro when the attackers struck. He was killed by “stab wounds to the chest”, the coroner said.

James McMullan (32), from Brent, northwest London, was last seen outside the Barrowboy and Banker pub and was killed by a haemorrhage caused by a knife wound to his chest in Borough Market.

In the hours – and in some cases days – following the attack, families and friends desperately tried to find out what had happened to their loved ones. The Metropolitan police said the formal identification process was painstaking, and said they were “liaising with the families and hope to formally confirm the victims as soon as we can”.

Seven men remain in custody in connection with the London Bridge attack. A 19-year-old man is being held on suspicion of preparing terrorist acts following a raid at an address in Barking, east London, at 9.50pm on Sunday, Scotland Yard said on Monday, bringing the total number of arrests in the investigation to 21.

A social worker from British Columbia, Canada, 30-year-old Christine Archibald was the first victim to be named by her family. Archibald, who worked in a homeless shelter, would have “no understanding of the callous cruelty that caused her death”, said her family. It is believed she was struck by the speeding van while with her fiance Tyler Ferguson.

His sister wrote on Facebook: “Last night in London, my baby brother, lost the love of his life on the London Bridge.In a split second his entire life was ripped away from him. Hearing his painful sobs on the phone while he’s alone trying to deal with this tears me apart.

“I have no words. If you know Tyler, please be there for him now, and later when what happened sinks in, he’s going to need us all.”

Archibald’s family said she had “room in her heart for everyone and believed strongly that every person was to be valued and respected”.

“She lived this belief working in a shelter for the homeless until she moved to Europe to be with her fiance. She would have had no understanding of the callous cruelty that caused her death,” they said. “Please honor her by making your community a better place. Volunteer your time and labor or donate to a homeless shelter. Tell them Chrissy sent you.”

Londoner, James McMullan (32), who lived in Hackney, who was about to launch an e-learning business and was on a night out with old school friends when he was killed by the London Bridge attackers. His sister Melissa said: “There will only ever be one James. Nowhere else will you find such humour and unique personality with someone who puts friends and family above all else. He was an inspiration.”

Paying tribute to him, she said: “’While our pain will never diminish, it is important for us all to carry on with our lives in direct opposition to those who would try to destroy us and remember their hatred is the refuge of small-minded individuals and will only bring more. This is not a course we will follow, despite our loss.”

McMullan was working on a web-based business to “revolutionise education”, according to his father who called him an “exceptional man”.

Australian nanny Sara Zelenak is believed to have been separated from friends in the chaos. In a statement, her family, who had been “bracing for the worst”, said: “We are deeply saddened at the tragic loss of our beautiful daughter and sister of Harrison and Scott. Sara’s family and friends are devastated.”

Zelenak would call her mother every day, but had not answered calls or texts since the moment she became parted from friends. Her mother Julie Wallace wrote on Facebook: “Sara Zelenak is confirmed dead, they found her body and has DNA tests confirmed. Thank you for all the overwhelming love and support from everyone.”

Australian nurse Kirsty Boden from Loxton, in South Australia, was attacked by the knife-wielding terrorists while coming to the aid of other injured people. Her family said her actions demonstrated “how selfless, caring and heroic she was”.

“As she ran towards danger, in an effort to help people on the bridge, Kirsty sadly lost her life,” they said. “We are so proud of Kirsty’s brave actions, which demonstrate how selfless, caring and heroic she was, not only on that night, but throughout all of her life.”

Boden worked in theatre recovery at Guy’s hospital in London, where she was described as “one in a million”. She was an avid traveller and wrote a blog detailing her love of adventure and discovery. “I’m just your average dreamer, with a full-time job and a constant longing to go where I haven’t been,” Boden wrote on her blog. “I have big travel dreams but I am realistic. I recognise that I might not go everywhere but I should definitely go everywhere I can, and so should you!.” In another post she wrote: “At risk of sounding cliche, life is short and we should all use the time we have wisely.”

Responding to news, Danny Mortimer, the chief executive of NHS Employers, said: “It is truly humbling that bright, hard-working people like Kirsty were brave enough to run towards danger in aid of victims lying helpless on the bridge following such a barbaric attack.”

Spaniard Ignacio Echeverría was hailed as a hero after it emerged that he used his skateboard to take on the attackers. The London-based HSBC worker, who lived in Poplar, east London, was reported missing after he was last seen on Saturday night lying on the pavement near London Bridge. A lack of information from British authorities left his family and Spanish authorities angry, but on Wednesday his family said he had died.

Echeverría, from Madrid, is thought to have been skateboarding in a park with friends when he stopped to defend a woman who had been injured in the attack near Borough Market.

In a Facebook post, his sister Isabel wrote: “My brother Ignacio tried to stop the terrorist and lost his own life trying to save others. [Ignacio] we love you and we will never forget you.”

Another sister, Ana, posted: “Ignacio didn’t survive the moment of the attack. Thank you to all those who love and cared about him. We know we are not the only ones saddened.”

Frenchman Sebastien Belanger, who worked at the Coq d’Argent restaurant in the City, had been living in London for seven years, and was reported missing by his girlfriend, Gerda Bennet. He had been watching the Champions League final in Boro Bistro, in Borough Market when the terrorists attacked.

French national Alexandre Pigeard was a waiter at the Boro Bistro and is believed to have died after being stabbed in front of friends. The restaurant’s manager, Vincent Le Berre, from Brittany, described how one of the attackers had jumped on to the roof of the bar before making his way down on to the terrace with a knife.

“One of the attackers got on to the roof of the bar and jumped on the parasol on the terrace, wounding one of my colleagues,” he told French news organisation Le Telegramme. “He immediately attacked a client who was killed. I managed to escape, but my friend Alexandre did not have a chance. He was stabbed in the neck with a knife.”

Originally from Caen, Pigeard was a fan of electronic music and organised gigs for Cargo, the Caen music venue, and the Nordik Impakt electronic music festival. Pigeard had been living in London for 2½ years after moving from Colleville-Montgomery, a small town near Caen.

Frenchman Xavier Thomas was the final victim to be named after his body was found four miles from London Bridge near Limehouse last Wednesday. The 45-year-old was walking south on the bridge with his girlfriend Christine Delcros – who is recovering in hospital after an operation sustained during the attack – when it is believed he was hit and thrown into the river by the terrorists’ van.

Loved ones appealed for information about the 45-year-old when he couldn’t be found. By Tuesday afternoon, his girlfriend’s sister said the family had still not had any news. “My sister has tried to remember every instant of the drama . . . we don’t understand why he hasn’t been found in the hospitals despite the photograph that has been circulated to help identify him. That adds to the worries we have. We fear that the collision with the terrorists’ van may have thrown him into the Thames. The more time that passes the more we fear the worst and our hopes dwindle.”