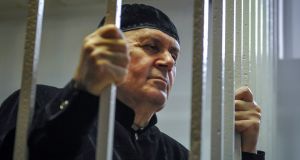 Oyub Titiev, the head of human rights group Memorial in Chechnya, at his verdict hearing at a court in Chechnya. Photograph: Said Tsarnayev/Reuters

A court in the Russian republic of Chechnya sentenced an award-winning human rights defender to four years in jail on Monday on narcotics charges that have been widely denounced as bogus and politically motivated.

Oyub Titiev, the head of the Memorial Human Rights organisation’s office in Chechnya, has been held in custody since January 2018 when local police alleged they had found marijuana in his car.

Colleagues of the defendant say prosecutors fabricated the charges and staged a sham trial to punish him for documenting torture and extra-judicial killings in the republic.

“The guilty verdict and four-year sentence against Oyub Titiev is a gross injustice to this rights defender and a disgrace to the Russian criminal justice system,” said Rachel Denber, deputy director of the Europe and Central Asia division at Human Rights Watch.

A district court in the Chechen town of Shali declared Titiev guilty of possessing illegal drugs and sentenced him to four years in prison at the end of a marathon hearing on Monday evening.

The judge took nine hours to read out the verdict, and kept Titiev, who is 61 years old, standing in a cage in the packed court room throughout.

International rights groups slammed the verdict as a travesty of justice aimed at silencing human rights reporting on Chechnya.

Dunja Mijatovic, the Council of Europe’s commissioner for human rights, said she was dismayed by the verdict and the handling of the investigation and trial. “Since the beginning the accusations of marijuana possession against Titiev have lacked credibility,” she said. “His counterclaim that the evidence against him was planted was never given any serious follow up.”

A veteran human rights defender, Titiev became the director of Memorial’s office in the Chechnya in 2009 after his colleague Nataliya Estemirova was kidnapped and killed.

Memorial says Chechen prosecutors may have pressed charges against Titiev in retaliation for work to verify reports of a mass execution outside the capital Grozny in 2017 where law enforcers slaughtered 27 local residents without trial.

Others hold Ramzan Kadyrov, the autocratic president of Chechnya, directly responsible for the case.

The US sanctioned Mr Kadyrov for overseeing a regime involved in forced disappearances and extra-judicial killings in 2017 prompting the Chechen leader to launch a campaign to drive rights activists out of the republic as “enemies of the people”.

While in jail awaiting trial, Titiev was awarded the Vaclav Havel Prize that honours outstanding achievements in defending human rights.

But Memorial has had to shutter its office in Grozny and evacuate staff for security reasons.

In a statement last week the Council of Europe’s anti-torture committee slammed the Russian government for turning a blind eye to the “deep-rooted problems of unlawful detentions and torture” in Chechnya. “This speaks to a dereliction of duty at the level of the [Chechen] republic’s authorities, but also to a failure of effective oversight and control at the [Russian] federal level.”