How Anne Marie Waters went from Stoneybatter to Ukip 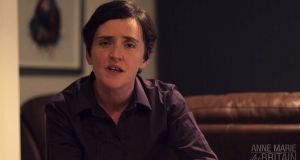 A still from a video for Anne Marie Waters’s Ukip leadership campaign.

Anne Marie Waters describes herself as “passionately, loyally, resolutely and proudly British”, but as her accent testifies, she is a Dubliner who grew up in Stoneybatter. A lesbian who is in a civil partnership, Waters is a former LGBT activist and secularist campaigner whose political life began in the British Labour party before veering sharply to the right.

Waters studied journalism at Nottingham Trent University, graduating in 2003 before going to work in the National Health Service. She left Labour in 2013 after failing to win selection as a parliamentary candidate, but she was a controversial figure while still a member.

In November 2013, she resigned from the pressure group One Law for All, which opposes sharia law, because, according to the group, of “political disagreements on some key issues, including One Law for All’s refusal to collaborate with the members of racist and far-right groups”.

Waters then launched her own group, Sharia Watch UK, organising a “Draw Muhammad” exhibition featuring cartoons of the prophet which was cancelled due to safety fears. By now, she had joined Ukip, standing for the party in Lewisham East in the 2015 general election, when she called for a ban on Muslim immigration.

“A lot of people need to be deported. Many mosques need to be closed down. It really has to get tough.”