Guerrilla gardening in Yorkshire reclaims the streets – in a nutrious way

Incredible Edible Todmorde are part of a global gardening revolution 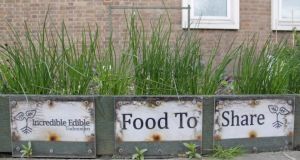 Chives growing in front of the community college in Todmorden, UK, one of the city’s dozen or so public growing spots. Photograph: Anna Polonyi 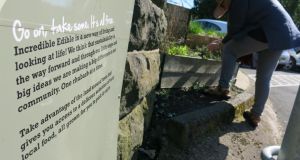 Take the local train north of Manchester and you will spot a Hollywood- style sign on a hill that says “Kindness” in large white letters. It overlooks Todmorden, an old cotton-mill town and the birthplace of an urban-gardening revolution.

“I still get a thrill when I pick an artichoke here,” says Estelle Brown in front of the local police station. Brown is one of about 30 volunteers who make up Incredible Edible Todmorden, the gardening group that has made their west Yorkshire town famous by claiming public land and growing food for everybody.

Similar to Ireland’s Grow It Yourself movement, this one started with part of a kerb here, a corner there. Seven years and 400 volunteers later it adds up to about 1,000 fruit trees and two dozen raised beds around town: cherries and pears by the health centre, rhubarb and broccoli in front of the community college, potatoes and kale in the train-station car park.

Anyone can pick what they please: herbs are available year round; for the rest, volunteers stick a “pick me” sign in the ground when they are ready.

“We don’t like to call it guerrilla gardening, because that reminds us of macho warfare. We’d rather call it naughty but nice,” says Mary Clear, the group’s chairwoman, whose kitchen doubles as Incredible Edible Todmorden’s main headquarters.

Clear’s motto: “Sometimes it’s better to ask for forgiveness later than to ask for permission.” This applies to much of the movement, which appropriated public land, root by root, until the local council finally created an “incredible” licence that allows residents to grow food on patches of unused public property for up to three years.

The people of Todmorden have tapped into something both old and new. During the second World War the UK’s extensive Dig for Victory campaign encouraged people to grow their own food in public spaces, including Hyde Park in London.

Interest in urban gardening has grown over the past decade. Consumers wish to reduce the distance their food travels; city officials worry about food sourcing.

If cut off from the rest of the world, most major European cities would be able to feed their inhabitants for no more than four days, she says.

Incredible Edible Todmorden never set out to make the town self-sustainable – the all-organic produce meets less than 5 per cent of the population’s food needs. But it takes the idea of traditional community gardens a step further than traditional allotments by being open-source: growing public food on public property. And supporting local food and businesses is at the heart of its mission.

An early example of propaganda planting was at the derelict Abraham Ormerod health centre, where the serial-killing GP Harold Shipman once worked. A place that passersby used to avoid became a flourishing garden. It was not long before the nearby community college and police station, both on the busy Burnley Road, had their own conspicuous raised beds.

The canal, which is popular with both boat users and walkers, is also a showcase for edible planting. The Canal and River Trust now welcomes planting next to towpaths, after locals went ahead and just did it without asking.

Along the Green Route of walkways are edible and bee-friendly plantings designed to bring a unity and identity to the town. The route creates a pedestrian circuit from the railway station, along the canal, through the health centre, with its fruit trees and “apothecary garden”, past the Hippodrome Theatre and back towards the market in the town centre – which is itself a showcase for local produce.

There is also an Aquagarden, a social enterprise that sprung out of the movement. The experimental learning centre breeds fish and recycles their faeces to grow plants without soil. The restaurant across the street will soon be putting local tilapia on its menu.

Similar Incredible Edible initiatives are now in place in more than 20 countries, from Australia to Senegal, Cuba and Japan.

Incredible Edible Cloughmills, begun in 2011, says: “We wanted to reconnect people with each other, their community and the natural environment using the language of food. We believe everyone should have the right to access safe, healthy and affordable food, locally and we want to rediscover all the lost skills and arts surrounding food. Food should be a celebration, not something we access 24 hours a day.”

One of the many people Todmorden has inspired to be naughty and nice is Emilien Buffard, a 24-year-old who started an edible garden in Rosario, Argentina. With a few medical students interested in therapeutic herbs, he claimed a patch of public lawn for produce. “People at first were pessimistic,” Buffard says. “They said it might work in Europe, but here there is too much theft and vandalism. But why steal something that is already yours?” The garden has since become a local landmark, yielding avocados, lemons, oranges and aubergines.

Todmorden’s climate is unlikely to grow anything as exotic as Rosario. But the modest crew of volunteers who get together to dig twice a month know their town has become a magnet for “vegetable tourists”.

“Incredible Edible has made the town famous,” says Michael Gill, the mayor. “It took off more than anyone could have expected, and people now come from all around the world to see for themselves.”