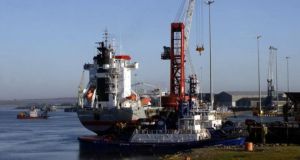 Foynes port authorities said they were satisfied the proposed Shannon-Dublin pipeline would not “materially impact” dock operations at the facility.

Shannon Foynes Port Company has rejected warnings that Irish Water’s planned extraction of water from the river Shannon for Dublin homes and business could hit operations at Limerick port.

Campaigners against the proposed pipeline said it believed Irish Water’s plan to take out 330 million litres a day from the Shannon could lower water levels at the mouth of the river.

“If there isn’t sufficient strength of speed and flow – that is, if there is less water – the shipping channels will silt up and ships will not reach Limerick port. That would be a massive economic blow,” said Gerry Siney of the River Shannon Protection Alliance.

Port authorities said they were satisfied the pipeline would not “materially impact” dock operations at the facility, which relies on deep-water channels for much of its traffic.

Saying Irish Water had dismissed other solutions for Dublin’s water needs, including desalination, Mr Siney claimed water levels on the Shannon could drop by 26 per cent.

“The level of the Shannon is the key to the whole thing. Taking Limerick, for example, at low tide we depend on the fast flow of the river to clear the shipping channels. It’s down to the amount of rain that falls.

“In the summer you’re getting less rain, and therefore the levels do go down in a natural way. Only in the past two or three years, boats have been running aground on the Shannon, and that’s without any water abstraction to Dublin. Warnings are given all the time about the dangers of running aground.”

He said such a water level drop could not be tolerated. “The Shannon is a living system and you have flora and fauna in special areas of conservation which are very sensitive to drops in water levels,” he added.

Farming groups also oppose the plan. Labour TD Jan O’Sullivan said the pipeline, if it is given permission to go ahead, “should be controlled from Limerick and not Dublin”.

“We all know that sometimes we have too much water coming down the river, and it causes problems. I would argue that the midwest should be able to say to Dublin it can take water at this particular time but it can’t take it when water levels are too low.”