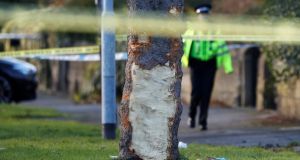 Five people, including three boys, have died after a stolen car hit a tree in West Yorkshire in the north of England.

Two 15-year-old boys were in custody following the crash on Stonegate Road in Leeds on Saturday night.

A spokesman for the force said police were called at 9.54pm after a stolen Renault Clio had collided with a tree.

The families of the deceased have been informed.

A spokesman for West Yorkshire Police said officers were confronted by a scene of “complete carnage” when they arrived at the crash site on Stonegate Road.

He said that just one vehicle had been involved but it was not yet clear whether the five victims and two suspects had all been in the car.

“Whether they were all in the car or whether some of [the victims] were pedestrians we can’t say at this point in time.

“We’ve got the road closed, an investigation in place and we’re trying to find out what’s occurred.” - Guardian News and Media/PA