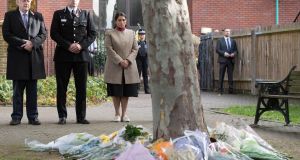 Extra UK immigration officers are to be deployed at the Belgian border port of Zeebrugge and more Border Force staff will operate at Purfleet in Essex after 39 people were found dead in a refrigerated trailer in Essex last week, the UK’s home secretary has said.

The trailer travelled from Zeebrrugge and Purfleet before the bodies of eight women and 31 men were found in the container attached to a Scania cab in Grays, Essex, in the early hours of October 23rd. In an update to MPs on Monday, Priti Patel said it was imperative to prevent a repeat of the “appalling” tragedy. “I can confirm the Border Force are . . . increasing their presence in Purfleet,” she told the House of Commons. “They too are working alongside Essex police to get further information regarding this incident.” She added: “As of today, I have received agreement from the Belgian authorities to deploy extra UK immigration enforcement officers to Zeebrugge.”

Ms Patel said the process of identifying the victims was ongoing and it would be a “long and meticulous investigation”. She said the nationality of the victims could not yet be confirmed. Police initially said all those who died were Chinese nationals. After a number of Vietnamese families came forward fearing that their relatives may be among the victims, officers from Essex constabulary met the Vietnamese ambassador to the UK. The Vietnamese government said on Monday it had received dossiers from the UK requesting its assistance in identifying four of the 39 victims, although the deputy foreign minister, Bui Thanh Son, said there had been no confirmation as yet that any of its nationals were among the dead.

Ms Patel, a hardliner on immigration, said the reasons for illegal immigration were “broad and complex” and the rise in global migration and organised criminality was one of the most pressing international issues. “It is clear we and all our partners must enhance our response,” she said. “All areas of government have a role to play, whether it’s in strengthening our borders and eliminating the pull factors in this country or addressing many of the root causes to suppress demand for illegal immigration.”

Earlier on Monday, Ms Patel and British prime minister Boris Johnson signed a book of condolences for the victims and laid wreaths in Thurrock, near Grays. Mr Johnson wrote: “The whole nation and indeed the world has been shocked by this tragedy and the cruelty of the fate that has been suffered by innocent people who were hoping for a better life in this country. We mourn those who lost their lives. Our thoughts are with their families far away. In condemning the callousness of those responsible for this crime, we in the government of the United Kingdom resolve to do everything in our power to bring the perpetrators to justice.”–Guardian