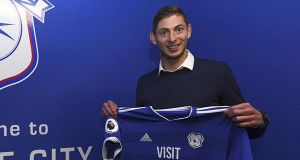 Sherry Bray (48) and Christopher Ashford (62) have been summonsed to a British court after an image was circulated extensively on social media which showed the Argentinian striker’s remains at the Holly Tree Lodge mortuary in Bournemouth following his death in a plane crash.

Wiltshire Police said Bray, of Charles Street, Corsham, has been summonsed for three counts of computer misuse, perverting the course of justice and sending an indecent/offensive message.

Ashford, of Page Close, Calne, has been summonsed in relation to six counts of computer misuse.

The pair, who were arrested in February, will appear at Swindon Magistrates’ Court on July 10th.

Striker Sala (28) had just signed for Cardiff City when he and the pilot of a Piper Malibu private plane disappeared when the plane crashed in the English Channel on January 21st.

Sala’s body was recovered on February 6th, but pilot David Ibbotson (59), of Crowle, Lincolnshire, has not been located. – PA