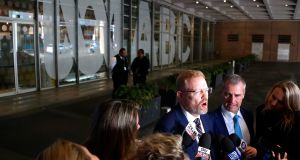 Australian police raided the offices of the national broadcaster on Wednesday over allegations it had published classified material, the second raid on a media outlet in two days, prompting complaints of assaults on press freedom.

The Australian Federal Police said its officers carried out a search warrant at the head office of the government-funded Australian Broadcasting Corp (ABC) in Sydney.

Police raided the home of a News Corp editor a day earlier, although they said the raids were unrelated.

The ABC said the raid was over its 2017 reports about alleged misconduct by Australian troops in Afghanistan, while News Corp said the raid at an editor’s home on Tuesday related to a 2018 report about plans for surveillance of Australians’ emails, text messages and bank records.

“It is highly unusual for the national broadcaster to be raided in this way,” ABC managing director David Anderson said in a statement.

“This is a serious development and raises legitimate concerns over freedom of the press and proper public scrutiny of national security and defence matters,” he said.

Police questioning of journalists is not new, but raids on two influential news organisations sparked warnings that national security was being used to justify curbs on whistleblowing and reporting that might embarrass the government.

“There are insufficient safeguards to prevent law enforcement agencies from using these powers to expose journalists’ confidential sources,” said Emily Howie, a legal director at the Human Rights Law Centre.

“This is shocking for those who are targeted but this surveillance also has a chilling effect on people coming forward,” she added.

“It’s a complex case but it’s also a simple case. It comes down to: At what point are you obliged to basically rebel against the government?” online publication The New Daily quoted McBride as saying on Wednesday.

The home affairs minister must authorise raids considered politically sensitive, according to guidelines on the police website.

Mr Dutton denied involvement in the police investigations and said his office was notified after the raids were carried out.

“It is entirely appropriate they conduct their investigations independently and, in fact, it is their statutory obligation,” Mr Dutton said in a statement.

Police confirmed they had not notified Mr Dutton in advance and said their actions were “independent and impartial at all times”.

Both raids “relate to separate allegations of publishing classified material . . . which is an extremely serious matter that has the potential to undermine Australia’s national security”, they added.

ABC staff posted footage and comments as the raid unfolded.

“This is a bad, sad and dangerous day for a country where we have for so long valued ... a free press,” Lyons said on Twitter.

Peter Greste, director of the Alliance for Journalists’ Freedom, said the raids were a serious issue for Australians who he said cared deeply about press freedom.

Greste is a former Al Jazeera reporter who was jailed with two colleagues in Egypt from 2013-2015 on national security charges brought by the Egyptian government.

“I’m not suggesting that Australia is about to become Egypt any time soon but what we are seeing seems to me to be on the same spectrum,” he said. – Reuters