US president warns that all areas of the economy, including the National Health Service, must be up for negotiation 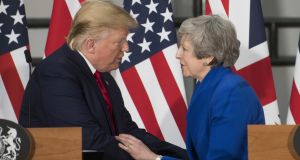 President Donald Trump and prime minister Theresa May during a joint press conference in London during the second day of the president’s state visit. Photograph: WPA Pool/Getty Images

Donald Trump has promised Britain a “phenomenal” trade deal after Brexit, but he warned that all areas of the economy, including the National Health Service (NHS), must be up for negotiation.

“I think everything with a trade deal is on the table. When you’re dealing in trade, everything is on the table – so NHS or anything else,” the president said during a joint press conference with Theresa May on the second day of his state visit to Britain.

Mrs May, who will step down as Conservative leader on Friday, said it would be for both sides to negotiate the scope of any trade deal. A number of candidates to succeed her insisted that the NHS would never be on the table in any trade deal with the US.

“I want to see the UK get fair deals on trade with the US and many other countries when we leave the EU. But the NHS is not for sale to any country and never would be if I was prime minister,” said former Brexit secretary Dominic Raab.

The president praised Mrs May’s handling of negotiations with the EU, suggesting that she had “teed up” the withdrawal agreement for her successor.

And he joked about the prime minister’s failure to take his advice to sue the EU during the negotiations.

“I would have sued and settled, maybe, but you never know. She’s probably a better negotiator than I am. She has got it, in a sense – that deal is teed up, I think they have to do something. Perhaps you won’t be given the credit you deserve if they do something, but I think you deserve a lot of credit – I really do.”

Mrs May acknowledged her differences with Mr Trump, notably on the Iran nuclear deal, which Britain continues to support, and the economic relationship with China.

Mr Trump appeared to withdraw a threat to limit intelligence sharing with Britain if it allowed the Chinese telecoms firm Huawei to participate in building its 5G network.

“We are going to have an agreement on Huawei and everything else. We have an incredible intelligence relationship, and we will be able to work out any differences. We did discuss it. I see absolutely no limitations. We’ve never had limitations. This is a truly great ally and partner, and we’ll have no problem with that.”

Mr Trump spoke by phone on Tuesday with Boris Johnson, the frontrunner to succeed Mrs May, and was due to meet environment secretary Michael Gove later in the evening.

“When you’ve created that sense of hatred, destroyed people’s self-esteem by that form of racism, you haven’t built a house, a school, trained a nurse, defended our national world, just created a greater sense of hate and hatred that goes with it.”

Labour acknowledged that Mr Corbyn sought a meeting with Mr Trump during this week’s visit, but the president declined to meet him.