SA corruption whistleblower: Boss could tell former president Zuma ‘what to do’ 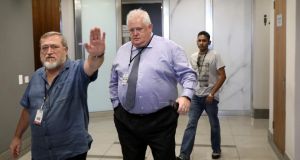 A whistleblower who gave explosive evidence to a public inquiry into political corruption in South Africa last week is set to continue his testimony on Monday.

Giving evidence last Thursday, Agrizzi said his boss, Gavin Watson, held such sway over Zuma that he could tell the former president “what to do”.

Agrizzi’s comments were made after a secret audio recording of a conversation he said he had with Watson and Linda Mti, a former correctional services commissioner, was played at the Commission of Inquiry into State Capture, Corruption and Fraud in the Public Sector.

In the recording made on May 8th, 2015, a man who is allegedly Watson can be heard rehearsing what he is going to say to Zuma, whom he was due to meet a few days later, in relation to how he could protect Bosasa from prosecution linked to a 2009 Special Investigating Unit (SIU) report that incriminated the company.

The man identified as Watson goes on to list some NPA officials who could be appointed to protect Bosasa, including the then deputy national director of public prosecutions, Nomgcobo Jiba.

Earlier on Thursday, Agrizzi produced a notebook at the inquiry that he said he used to record the bribes government officials got in 2016 from Bosasa via Mti, who was also, he said, on a 100,000-rand-a-month (approximately €6,500) kickback.

Another top prosecutor, the NPA’s specialised commercial crimes unit head, Lawrence Mrwebi – he was dubbed the “Snail” – was given only 10,000 rand per month because he was slow to act in Bosasa’s interests, Agrizzi told the inquiry.

Jiba, who is currently the subject of a separate inquiry into her fitness to hold office at the NPA, has denied receiving any bribes from Bosasa.

Agrizzi testified that in exchange for payments Bosasa illegally received a string of confidential NPA documents via Mti on its investigations into the company, which helped it to develop legal strategies to defend itself.

The documents contained a draft charge sheet against Bosasa as well as investigation updates compiled by NPA prosecutors. Email exchanges between prosecutors related to Bosasa investigations were also included, according to Agrizzi.

Giving evidence last Tuesday , Agrizzi said when the SIU started investigating Bosasa for corruption, Watson instructed him to get rid of all incriminating documentation.

This involved faking a server crash, setting fire to computers and thousands of documents and then burying the burnt remains in a hole.

The SIU report dealt with four suspicious multibillion rand contracts Bosasa was awarded from the Department of Correctional Services for CCTV, fencing, catering, and access control at prisons across the country.

The NPA investigation into Bosasa was eventually shelved despite the evidence in the SIU report.

The Johannesburg-based inquiry initially had a focus on whether controversial business family the Guptas had undue influence over Zuma during the nine years he served as South Africa’s president, which came to an end last February.

However, Agrizzi was unveiled as a surprise witness on January 16th and since then his testimony has been its main focus.

The ruling African National Congress party this week branded Bosasa a “cartel” and said Agrizzi’s testimony showed there was a plan to create a “mafia state” in South Africa.