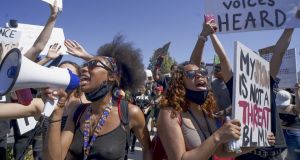 Black Lives Matter demonstrators march during a rally on Sunday in Santee, California in the 13th day of protests since George Floyd died in Minneapolis police custody on May 25th. Photograph: Sandy Huffaker/Getty Images 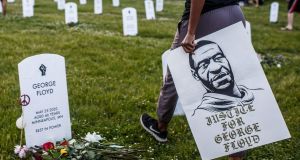 A person holds a placard with a portrait of George Floyd during a candlelight vigil at an installation created by Anna Barber and Connor Wright called Say Their Names to honor victims of police brutality on Sunday in Minneapolis, Minnesota. - Photograph: Kerem Yucel/AFP/Getty Images

Minneapolis City Council has pledged to disband the city’s police department, following the death of African-American man George Floyd two weeks ago which sparked protests across the globe.

Nine members of the council – constituting a veto-proof majority of the 12-member body – said on Sunday the police department would be abolished and a new “public safety” system put in its place.

Local authorities have significant power over policing in the United States. Camden, a city in New Jersey that suffered from high crime rates, abolished its police service in 2013, replacing it with a county-wide system.

The pledge from Minneapolis City Council comes as four of its officers face charges over the death of Mr Floyd (42) after he was arrested on May 25th. Footage filmed by a passer-by shows one of the policeman pressing his knee on the detainee’s neck for more than eight minutes as he lay handcuffed on the kerb. The president of the council, Lisa Bender, announced the move on Sunday.

“Our efforts at incremental reform have failed,” she said of the city’s police department at a community meeting.

The development comes as several activist groups across the United States called for policing to be completely reformed, with a “defund the police” campaign gaining attention on social media.

In Washington, the phrase was added to a huge mural painted across several blocks of 16th street close to the White House last week.

New York mayor Bill de Blasio said on Sunday that he would cut funding for the New York police department for the first time and divert some of that funding to social services – the latest example of tensions between elected officials and police departments.

At the weekend, Washington DC witnessed the largest mass protests in the city in recent years, as more than 10,000 gathered in the nation’s capital to demonstrate against racism.

Marches took place at key points around the city, culminating in a demonstration in the street in front of the White House that was renamed Black Lives Matter Plaza on Friday by mayor Muriel Bowser.

Utah senator Mitt Romney was among those who joined the protests at the weekend. The former Republican presidential nominee was the only member of Donald Trump’s party to vote to impeach the president in the Senate in January.

Former secretary of state Colin Powell also criticised the president on Sunday, stating he would not vote for him in November’s election and asserting that Mr Trump had “drifted away” from the constitution in his threat to deploy the military to quell protests.

Addressing demonstrators at the weekend in Washington, Ms Bowser urged people to vote Mr Trump out of office. “Today we say no. In November, we say next,” she said, standing near the huge yellow lettering spelling Black Lives Matter along several blocks of 16th street.

Mr Trump, who spent the weekend at the White House, retweeted an earlier post denouncing the mayor as “grossly incompetent” and claimed there was a “much smaller crowd in DC than anticipated” for the demonstration.

As protests have rocked the US capital, a clash over control of the city’s streets has broken out between Ms Bowser, who controls Washington’s police force, and the Trump administration, which has significant federal power over the capital’s public space.

The US president also accused Democratic presidential candidate Joe Biden of wanting to defund the police force and military, claiming “he has no choice, the Dems are controlled by the Radical Left”.

“Sleepy Joe Biden and the Radical Left Democrats want to ‘DEFUND THE POLICE’. I want great and well paid LAW ENFORCEMENT. I want LAW & ORDER!” he said in a tweet.

He also announced that he was ordering the National Guard to withdraw from Washington “now that everything is under perfect control”. But he warned that the forces “can quickly return, if needed”.

Speaking on Sunday, Ms Bowser described the scenes last week that saw federal forces remove peaceful protesters from Lafayette Square as “basically an invasion of our city”. However, in a sign of the political battle ahead for Ms Bowser as she faces calls to act decisively on police reform, the words “defund police” were added to the Black Lives Matter street art on Saturday.

Ms Bowser declined to say if the new slogan, which was painted by the Black Lives Matter movement, would be removed by authorities.

Elsewhere across the country, some of the biggest rallies of recent days took place.

In Philadelphia, which saw scenes of civil unrest last week, thousands took to the streets to protest over the death of Mr Floyd and the issue of institutional racism in law enforcement. For the first time in a week, no curfew was imposed on the city on Sunday night.

Similarly in New York, Mr de Blasio lifted the nightly curfew a day early, after protests unfolded without incident in the city on Saturday night.

But controversy continued to simmer in upstate New York as two police officers were charged with second-degree assault after video footage showed them pushing a 75-year-old man during protests in Buffalo on Thursday. The man fell backwards, hit his head, and was shown lying in a pool of blood. He remains in hospital in a serious condition. The two officers had already been suspended without pay.

As the accused men appeared in court on Saturday dozens of their colleagues gathered outside in a show of solidarity. Fifty-seven members of the force’s emergency response team also resigned from their unit in protest at the treatment of their colleagues.

A Wall Street Journal/ABC poll showed that Americans were more troubled by police violence than at the demonstrations taking place across the country by a two-to-one margin.