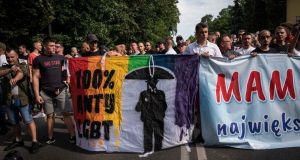 “Christians are the most persecuted religious group in the world, and the number of attacks on them is increasing year on year,” one article says, adding that there are hundreds of such attacks each year in Poland.

Deputy justice minister Marcin Romanowski, quoted in the sponsored article, wonders if the “attacks on the church are part of the planned political strategy”.

“If we punish anti-Semitism, we should punish for Christianophobia too,” he said.

The articles appear timed to coincide with the release of Hide and Seek, the second documentary film highlighting cases of paedophile priests in the Polish church. It tells of how Edward Janiak, bishop of Kalisz, knew of a paedophile priest for three years and ignored church guidelines to inform the Holy See.

Rather than explore the claims in the Sekielski brothers’ two films, the articles suggest the “increase in aggression against Christians in Poland” is part of an offensive by groups anxious to rip out Europe’s Christian roots.

The unnamed author of the articles suggests this is why LGBT rights advocates and the Polish left are stepping up their attacks on the the church – a campaign of “barbarity” not without historical precedent in Poland.

“The Soviets were also marching under the banners of tolerance and freedom, only now, instead of the red flags, they hang rainbow-coloured ones on the walls,” the article without a byline continue. “Their goals are linked by hatred for people with different views.”

Ahead of last year’s general election, amid rising clerical sex abuse revelations, the ruling Law and Justice (PiS) and its allies in the Catholic church stepped up their long-running campaign against the LGBT community.

His and other clerical remarks were seen by LGBT community members as a driving force behind attacks on their pride parades across the country. During last year’s campaign, a Polish newspaper distributing a sticker showing a crossed-out rainbow symbol, reading: “LGBT-free zone”.

Asked by Gazeta Wyborcza to explain the sponsored articles, Mr Romanowski, the deputy justice minister , said the Polish government was mindful of how, in the past, attempts to subjugate the country began with attacks on the church.