Why Centrist Dads will stop Brexit 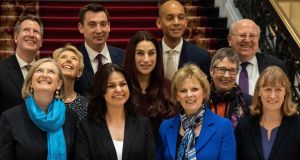 The Independent Group are a manifestation of a growing political trend that rejects the current doctrinaire shibboleths of both the left and right. Photograph: Niklas Halle’n/AFP/Getty Images

It was surely coincidental that Jeremy Corbyn surprisingly backed a second EU referendum on Monday just moments after a YouGov poll found that his Labour Party was haemorrhaging support to the newly minted Independent Group. The poll, asking people how they would vote in a general election, found that Labour were down to 23 per cent and that the Independent Group were polling at 18 per cent.

The current poll figures show that the combined support of the Independent Group and the similarly pro-EU, pro-second referendum Liberal Democrats was at 24 per cent, one point ahead of Labour. Corbyn was being squeezed by the middle, hence his volte-face.

The Independent Group was formed by seven ex-Labour MPs who resigned from the party citing their dissatisfaction with Corbyn’s approach to Brexit. Corbyn has had a career-long enmity to the EU and his ideological opposition to the European project mirrors that of the right-wing European Research Group led by Jacob Rees-Mogg – albeit it from an entirely different place on the political spectrum.

The Independent Group and their de facto leader, Chuka Umunna (who is quarter Irish, genealogy fans) are accused of being a spoiler party not anchored by any clear ideological belief. Given that three of their newest members defected from the Conservative Party, they appear to be an amorphous grouping united only in their desire to stop Brexit.

But the Independent Group are a manifestation of a growing political trend that rejects the current doctrinaire shibboleths of both the left and right. In a fractured political landscape they are donning the Sensible Parent mantle.

Except their usual voice of calm and clear moderation has now gone up an octave or two to resemble more of an exasperated shriek.

They are known by the colloquialism “Centrist Dads”. Ironically, they were given this pejorative nickname by Corbyn’s ex-official spokesman, Matt Zarb-Cousin. “Centrist Dads are middle-aged men who cannot come to terms with the world and politics changing. They think that they must know better because they are older and wiser,” said Zarb-Cousin two years ago when he sarcastically coined the term to describe those Labour Party members who were not on board with all aspects of Corbynism.

You don’t even need to be a Dad, or even male or middle aged to be a Centrist Dad. The stereotypical Centrist Dad may have both a cardigan and a leather jacket in his wardrobe and be a fan of Top Gear and Have I Got News For You.

But what most accurately characterises him/her is a rejection of dogmatic certainty – along with an at times annoyingly compulsive habit to tell younger people that they may think that way now but they’ll see things differently when they get to his/her age.

When Centrist Dad pin-up figure Tony Blair called the Independent Group a “fightback in an era of crisis and extremism” it was the perfect application of the soothing moderate analgesic centrist Dads like to bathe in.

Centrist Dads are nothing if not extreme-phobic. On Brexit, they are the voice of moderate reason between hard-right Tory nationalism and those within the Labour Party calling for “Lexit” on the basis the EU is a cosy, capitalist club.

The plaintive Centrist Dad cry that we all want a better world but we have to be grown-up and realistic about it has been attacked from both sides of the political spectrum. For the right, Centrist Dads are political milquetoast, for the left they have been described as “condescending, denialist, brocialist, mansplainers all packaged in the uncool blandness of a generic father”.

As a growing internationalist force, Centrist Dads now have a figurehead in the US. The screenwriter and creator of TV programme “The West Wing” (essential Centrist Dad fare), Aaron Sorkin recently outed himself as one when while expressing support for the new, younger Democratic Party voices such as Alexandria Ocasio-Cortez coming to the fore, warned that “these new Democrats now need to stop acting like young people, not be stupid and realise that politics is not just about transgender bathrooms”.

It is this core Centrist Dad belief – that younger people’s dogmatic certainty may only be the product of political inexperience – that has made them ripe for sometimes deserving mockery.

But the Centrist Dad Independent Group have already – within a matter of days of formation – made a dramatic impact on the Brexit debate.

On the morning after the June 2016 referendum,Corbyn was calling for article 50 to be triggered “immediately”.

Now he is calling for a second referendum.

After 2½ years of ideological single market and customs union fun and perilous backstop games, the boring parents of the Independent Group have arrived home and are asking who is responsible for this Brexit mess and for it to be tidied up immediately.