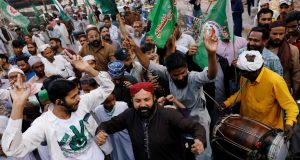 By launching air strikes against Pakistan, India has pointedly ascended the perilous conflict escalatory ladder between the two nuclear-armed neighbours, which have existed in a state of parlous conflict for most of their 72 years as independent states.

Many military planners in Delhi are of the view that India’s neighbour needs “chastisement”. Unleashing air power, they believe, is one such measure guaranteed to deter Pakistan from supporting Kashmir’s insurgency.

Pakistan, however, dismisses Indian allegations as baseless, saying it provides only diplomatic and political succour to the Kashmiri cause. And until this week, when it launched air strikes against a militant training camp inside Pakistan, India has refrained from taking such a provocative step.

Even during the 11-week long war in Kashmir’s mountainous Kargil region in 1999, for instance, in which a total of 1,200 soldiers from both sides died, India’s federal government opposed incursions by the Indian Air Force.

It was of the view that such an “escalatory” move would only worsen the security situation, and perhaps cause it to spiral out of control.

Countries including the US, China and Russia and to some extent the UK, which could have used their influence to calm down the situation and have done so in the past, have appeared too preoccupied with their own problems to intervene on this occasion.

The aerial dogfights that have erupted after 48 years between the two sides have been accompanied by jingoism mouthed from both administrations – the macho Pakistani military and Indian prime minister Narendra Modi’s Hindu nationalist government. Neither side is willing to blink and, for now, both sides appear to be hurtling towards potential disaster.

The situation is exacerbated by the fact that India’s general election is due before the end of May.

Many analysts believe that a politically insecure Modi, unsure of prevailing in the polls, launched the air strikes to boost his image, an endeavour in which he seems, for now, to have succeeded.

“Being placatory towards Islamabad does not seem an option for Modi and neither is it for the Pakistani military,” said Seema Mustafa, a social activist from the Center for Policy Analysis in New Delhi. The impasse had to somehow be broken, as the alternative was too horrible to contemplate, she said.