European backers hope to convince president to stay in agreement 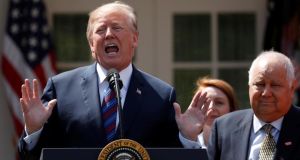 Donald Trump will say on Tuesday whether the United States will remain in the Iran nuclear deal. The American president said on Twitter that he will announce his decision at 2pm from the White House.

Mr Trump has repeatedly criticised the 2015 nuclear accord, promising to pull out of the deal during his presidential campaign. But European cosignatories to the deal are hoping they can convince the US to remain in the agreement if they commit to addressing US concerns about Iran’s ballistic-missile programme and Iran’s wider activity in the Middle East.

The price of US crude oil soared to a 3½-year high on Monday because of fears that the United States could pull out of the agreement. US oil prices passed $70 a barrel – the highest since November 2014 – amid increasing signs of tension between the US and other countries involved in the Iran deal.

The British foreign secretary, Boris Johnson, arrived in Washington on Monday for a series of meetings in a last-minute bid to salvage the deal, which Mr Trump has deemed “insane” and the “worst deal ever”.

In an appearance on the Fox News morning programme Fox & Friends Mr Johnson said he agreed with President Trump that there were problems with the deal. But he added: “We need to find a way of fixing that – the president has been right to call attention to it – but you can’t just do that without throwing the baby out with the bathwater.”

The United States does not need John Kerry’s possibly illegal Shadow Diplomacy on the very badly negotiated Iran Deal. He was the one that created this MESS in the first place!

My highly respected nominee for CIA Director, Gina Haspel, has come under fire because she was too tough on Terrorists. Think of that, in these very dangerous times, we have the most qualified person, a woman, who Democrats want OUT because she is too tough on terror. Win Gina!

Writing in the New York Times, Mr Johnson also urged the United States to stick with the deal, warning that it would be a mistake for the United States to walk away. “Of all the options we have for ensuring that Iran never gets a nuclear weapon, this pact offers the fewest disadvantages.”

Although Mr Trump did not tweet in response to Mr Johnson’s appearance on Fox & Friends – one of the president’s favourite programmes – he did respond to reports that the former secretary of state John Kerry has been pressing Iran and other signatories to stick with the deal.

“The United States does not need John Kerry’s possibly illegal Shadow Diplomacy on the very badly negotiated Iran Deal,” Mr Trump wrote on Twitter. “He was the one that created this MESS in the first place!”

The White House also confirmed on Monday that the US president will not attend the opening of the new US embassy in Jerusalem next week. Instead he will be represented by the deputy secretary of state John Sullivan, Mr Trump’s daughter Ivanka and son-in-law, Jared Kushner, his treasury secretary, Steve Mnuchin, and other senior officials.

The Trump administration’s decision to move the US embassy from Tel Aviv to Jerusalem has been one of the most contentious foreign-policy decisions of his presidency, given the contested status of Jerusalem, which both Israelis and Palestinians claim as their capital.

On Monday the US president also took to Twitter to defend Gina Haspel, his nominee to become the next CIA director, ahead of her senate confirmation hearing on Wednesday. His intervention came amid reports that the long-serving CIA aide offered to step aside from the nomination process because of concerns about her past involvement in anti-terrorism missions.

“My highly respected nominee for CIA Director, Gina Haspel, has come under fire because she was too tough on Terrorists,” the president tweeted. “Think of that, in these very dangerous times, we have the most qualified person, a woman, who Democrats want OUT because she is too tough on terror. Win Gina!”

Ms Haspel, who is currently the CIA’s deputy director, has spent 33 years at the agency. She was nominated by Mr Trump to replace Mike Pompeo after his move to become secretary of state. But her nomination has come under scrutiny because of her alleged involvement in CIA intelligence programmes that included waterboarding in the period after the September 11th attacks of 2001.