Dozens of Tory MPs rebel against government on Covid restrictions 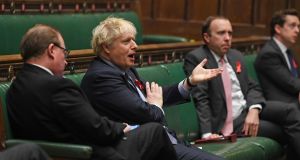 MPs have voted to allow England to enter a new, three-tier system of coronavirus restrictions when it leaves lockdown on Tuesday.

But in the biggest backbench rebellion since Boris Johnson became prime minister, 56 Conservative MPs voted against the new measures, while Labour, the Scottish National Party (SNP) and the Liberal Democrats abstained.

Boris Johnson tried to appease his rebel backbenchers by promising to consider a more localised system that would avoid places with a low infection rate being placed in a higher tier because of the county they are in.

“As we go forward, and I mean this very sincerely, the government will look at how we can reflect as closely as possible the reality of what is happening on the ground for local people, looking at the incidence of the disease, looking at the human geography and spread of the pandemic, and indeed the progress that areas are making in getting the virus down. We will try to be as sensitive as possible to local effort and to local achievement in bringing the pandemic under control,” he said.

The new system, which will see all but a handful of places under the two highest levels of restrictions, will be reviewed on December 16th. But Labour leader Keir Starmer said Conservative backbenchers hoping that their constituencies will be moved to a lower tier after that were set to be disappointed.

Conservative MPs who spoke out against the measures included former ministers David Davis, Andrea Leadsom, Damian Greens and Jeremy Wright. Graham Brady, chairman of the 1922 Committee, said the government had failed to demonstrate beyond question that the limits it was placing on personal freedom were necessary.

“Different members of this House will draw the line in different places, but we must all accept that these are fundamental freedoms of our constituents, and we should insist on compelling evidence before we allow them to be compromised.”

The new measures, which are close to a full lockdown under the highest tier, will remain in place until February and Mr Johnson said MPs would be able to vote in January on whether to renew them after that. Although he said that parts of the country that saw their infection rates fall sufficiently in the coming weeks would be able to move into a less restrictive tier, he acknowledged that restrictions would remain in place until a vaccine is rolled out.

“We have to be realistic, and we have to accept that this vaccine is not here yet – no vaccine is here yet. While all the signs are promising, and almost every scientist I have talked to agrees that the breakthrough will surely come, we do not yet have one that has gained regulatory approval, and we cannot be completely sure when the moment will arrive,” he said.