Jozsef Szajer stopped by police after being spotted ‘fleeing along gutter’ 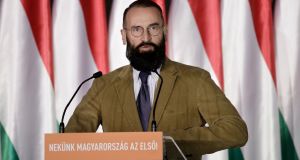 Jozsef Szajer resigned as an MEP for the Fidesz party, which portrays itself as a staunch defender of “traditional” values. Photograph: Peter Kohalmi/AFP via Getty Images

Jozsef Szajer apologised for the incident and denied taking drugs at last Friday night’s party, which he did not mention the following day when he announced he was resigning as an MEP for the Fidesz party, which portrays itself as a staunch defender of “traditional” values.

Belgian prosecutors told news agencies that 20 men were caught at the party and fined €250 each. Local press said the event took place in an area of central Brussels that was well known for its gay bars.

“After the police asked for my identity – since I did not have ID on me – I declared that I was a MEP. The police continued the process and finally issued an official verbal warning and transported me home,” Mr Szajer said in a statement.

“I deeply regret violating the Covid restrictions, it was irresponsible on my part,” he added, without giving any details of the party.

“I did not use drugs, I offered to the police to undergo an official test, but they did not do one. Police said an ecstasy pill was found. It is not mine, I do not know who placed it there or how,” he said.

Mr Szajer was a close ally of Hungarian prime minister Viktor Orban and an author of a new Hungarian constitution that Fidesz drew up after returning to power in 2010. It effectively banned same-sex marriage, and set the tone for a raft of legal changes that activists say have eroded the rights of sexual minorities.

“The misstep is strictly personal, I am the only one who has responsibility for it. I ask everyone not to extend it to my homeland, or to my political community,” said Mr Szajer, who is married to a prominent judge on Hungary’s constitutional court.

The public prosecutor in Brussels did not name Mr Szajer but said a man born in the same year and with the same initials was stopped by police after being spotted “fleeing along the gutter”.

“The man had bloody hands. He may have been injured while fleeing. Narcotics were found in his backpack. This man could not provide any identity documents. He was escorted to his place of residence, where he identified himself on the basis of a diplomatic passport.”