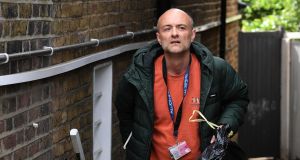 Described as the prime minister’s Rasputin, Dominic Cummings is no stranger to the spotlight. In fact he has made a career out of eschewing the rules and courting notoriety.

He came to the fore as a special adviser to Michael Gove between 2007 and 2013, and attracted further attention as the chief administrative mastermind behind the successful leave campaign in the 2016 referendum on Britain’s membership of the EU.

After being appointed as the prime minister’s de facto chief of staff in the summer of 2019, he became one of the most powerful unelected political figures in the country.

The appointment of the abrasive former campaign director was controversial, given he had been found to be in contempt of parliament earlier in the year for refusing to give evidence to MPs investigating misinformation.

A longstanding Eurosceptic, Cummings has built a reputation as someone who does not play by the rules of conventional politics, and he was once called a “career psychopath” by the former prime minister David Cameron.

His appointment as head of the Vote Leave campaign was dramatised in the Channel 4 drama Brexit: The Uncivil War, which played up his role in covering a bus with the disputed £350m-a-week figure, arguing that the cash could be used to fund the NHS.

He was in the headlines again after he posted an advert on his personal blog for “weirdos and misfits with odd skills” to work for the government.

In the post he said career civil servants and “public school bluffers” in Whitehall were ill-equipped to take decisions about complex issues. Instead, he issued a recruitment call for mathematicians and data scientists to be given more prominence in the corridors of power, shaking up the civil service.

Cummings is married to Mary Wakefield, a senior editor at the Spectator and the daughter of Sir Humphrey Wakefield

In April it was revealed that Cummings had been present at meetings co-ordinating the response to the coronavirus pandemic as part of the Scientific Advisory Group for Emergencies (Sage). This raised concerns over a lack of breadth of expertise in the meetings and political interference in science-based advice.

Cummings, from Durham, in the northeast of England, has been known to play up his northern roots. His father, Robert, was an oil rig engineer and his mother, Morag, a teacher and behavioural specialist.

He went to a state primary school and was then privately educated at the £16,000-a-year Durham School. He graduated from Oxford University with a first-class degree in modern history and spent some time in Russia, where he was involved with a failed attempt to launch an airline, among other projects.

After a stint as campaign director for Business for Sterling, he spent eight months as chief strategy adviser to the then Conservative leader, Iain Duncan Smith. He played a key role in the 2004 campaign against an elected regional assembly in his native north-east.

This turned out to be precursor to the Brexit campaign, with the North East Says No team winning the referendum by latching on to the anti-establishment mood that was beginning to spread among the public.

Following this success he reportedly retreated to his father’s farm in County Durham to spend some time reading. He would re-emerge in 2007 as a special adviser to Gove, who became education secretary from 2010.

Cummings is married to Mary Wakefield, a senior editor at the Spectator and the daughter of Sir Humphrey Wakefield.

Cummings had previously been observed failing to follow the two-metre social distancing rules as he walked along Downing Street flanked by his fellow aide Cleo Watson on April 14th. – Guardian