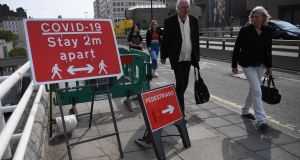 New coronavirus cases in the UK have risen to the highest level since mid-May.

A total of 3,539 new Covid-19 cases were recorded in the UK on Friday, its department of health said.

It is the highest such daily figure since May 17th, and Public Health England’s medical director Prof Yvonne Doyle warned it is a reminder of the “ongoing risk as the virus spreads throughout the UK”.

The figure rose sharply from the 2,919 new cases reported the previous day, and most of the cases involved people who have been tested in the community.

Prof Doyle said there were now “worrying signs” of infections among the elderly.

She said: “Although younger people continue to make up the greatest share of new cases, we’re now starting to see worrying signs of infections occurring in the elderly, who are at far higher risk of getting seriously ill.”

Testing capacity has increased since the previous high in May, meaning more tests for the disease are being carried out.

The rise in infections came as stricter measures were imposed on Birmingham in the latest local lockdown announcement, after a spike in cases there.

The city and neighbouring Solihull and Sandwell boroughs all face a ban from next week on socialising with people outside your own household.

Lockdown measures are also being tightened from midnight in Lanarkshire due to a rise in cases, the Scottish government said.

In Wales, first minister Mark Drakeford said coronavirus is “on the rise again” there, as he announced face coverings will become mandatory in indoor public places and the number of people who can meet at a gathering inside will be limited to six.

Data released by the Government Office for Science and the Scientific Advisory Group for Emergencies (Sage) shows the estimate for the R value – the reproduction number of coronavirus transmission – across the UK is now between 1.0 and 1.2.

According to government advisers, the last time the R number was above 1 was in early March.

A further six people had died within 28 days of testing positive for Covid-19 as of Friday, according to the UK government dashboard, bringing the UK’s total official death toll from the disease to 41,614.

Separate figures published by UK statistics agencies show there have now been 57,400 deaths registered in the UK where Covid-19 was mentioned on the death certificate. – PA

1 Helen McEntee holds up well for someone with barely a leg to stand on
2 In Brexit end game, Johnson scours menu of unpalatable choices
3 Restaurants and gastropubs to reopen in December under Government plan
4 Covid-19: Government set to reject advice and approve reopening of gastropubs and restaurants
5 Trump signals White House exit if Biden wins electoral college vote
Real news has value SUBSCRIBE